Kimberly Marten suggests that the main reason for Vladimir Putin’s invasion of Crimea was entirely domestic. He needed something to divert public attention from a huge unfolding scandal:

Putin’s scandal was the corruption surrounding the Sochi Olympics. As we all know by now, the construction costs associated with Sochi facilities and infrastructure exceeded $50 billion.

….Putin has stayed in power for so long because he has been able to control the snake-pit of competing informal political networks that surround the halls of power in Russia….Members of that network told some Americans privately in 2013 that they believed some kind of reckoning over corruption in Sochi would happen this spring, perhaps when it became clear that tens of billions of dollars in state loans could not be repaid….The public might never have known or understood what was happening, but Putin would have lost face where it matters most—inside Kremlin walls, where he is supposed to be the great informal network balancer. Putin’s 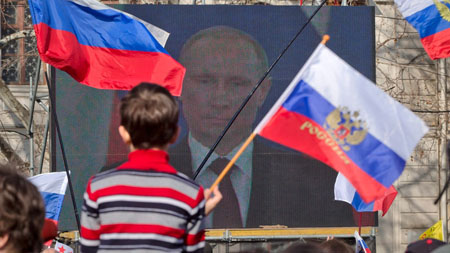 Crimean adventure neatly shifted the conversation to other topics, and no one is likely to bring it up again anytime soon.

….Diversion could not have been Putin’s only motive. There are certainly deep nationalist, historical, and triumphalist reasons for Putin’s actions, as Joshua Tucker wrote about here in The Monkey Cage last week. But it is striking how little Putin gained in Crimea. The region was subsidized by the rest of Ukraine, and he will now have to fund those subsidies out of the Russian state budget. Russian generators are now keeping the Crimean capital of Simferopol lit, as Ukraine turns off the electricity flowing in from the mainland. Crimea does have a crucial Russian naval base, but Putin already controlled that base without needing to occupy Crimea, because of a treaty that lasted through 2042.

The only thing that surprises me about this is that it’s presented as a novel thesis. I thought this was widely taken for granted. Obviously there were international triggers for Putin’s actions—the EU association agreement, the downfall of Yanukovich, the expansion of NATO, etc.—but it’s still striking that Putin was willing to give up so much on the international stage for something that, as Marten says, gets him almost nothing in return. By nearly any measure, Crimea simply isn’t much of a plum. If this was his idea of reasserting the Russian empire, Putin has a mighty cramped view of empire.

But it was massively popular domestically. Whatever else you can say about it, it’s certainly gotten the Russian public firmly on Putin’s side for the time being. I don’t know if anyone can say for sure that this was his primary motive—frankly, I’m not sure Putin himself even knows what his primary motive was—but it seems almost certain that it was a significant one. After all, Putin would hardly be the first world leader to shore up his public standing with a lovely little war abroad.