A few days ago, reader JF sent me an email about a problem he’s had with his new Obamacare policy:

I’m a single dad living in LA. I have been underemployed/unemployed for the past few years, and until January had been paying through the nose for an individual policy for myself and my son. I am very familiar with the ins and outs of health insurance and I’m used to checking with every provider beforehand to quantify out of pocket costs. It was a godsend to have affordable insurance as of January. I qualified for a heavily subsidized Silver plan. I want the ACA to work, and to work well.

It didn’t for me. Here’s what happened. The first time I sought care under my new policy it was in January for a standard annual checkup. I’m a healthy guy so for me it’s a few questions from the doctor and then they draw blood. My ACA plan allowed me to get this care with a co-pay of $3.

Then I got the bill from the blood lab for $800. The doctor sent it to a lab outside the ACA network. Yeah, I know, I could have double checked with the doc to make sure the blood was sent to an in-network lab (I had already checked once). Bottom line is that a CBC blood test is going to cost me EIGHT MONTHS worth of my subsidized insurance premiums.

Here’s the bad story on the horizon: Imagine what’s going to happen when millions of newly insured people, not savvy about how to police health care costs, start to get bills that far exceed what CoveredCA or healthcare.gov promised them? “My Obamacare policy cost me $800 for a blood test” is the next headline. It’s in line with the horror stories from Steven Brill last year.

I think progressives need to start talking about this because it should be addressed by our side, not just to avoid mid-term election embarrassment, but because poor folks can be harmed by it. Hand waving this away as “we got poor people insurance, our job is done” is a mistake.

How common are experiences like this? Common enough that a recent Commonwealth Fund report explicitly addresses this precise problem. Andrew Sprung saw the report, and it triggered his memory about a similar problem he had a few years ago when he checked himself into an ER with chest pains:

The ER team decided to keep me overnight and informed me that I would be checking out against advice if I left early. By the time I’d had two EKGs it was clear nothing was wrong with my heart, but I subjected myself to a CT-scan with stress test, an ultrasound, and a $20k tab of which we paid nothing except maybe a $100 deductible (and which the self-insured hospital network essentially paid itself, I suppose).

So I was weak and foolish — with one exception. At the beginning, I had to sign a release agreeing to pay for any out-of-network care I received in-hospital. The attending doctor was at hand at the time. I asked him if he was in-network. He said he didn’t know. I said, how can you not know? He said his office dealt with “hundreds” of insurance plans. He offered to check. I said please do. He 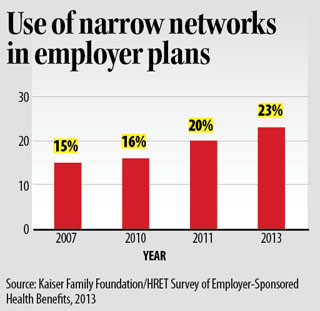 came back a few minutes later and said he had confirmed that he accepted the insurance plan provided to employees of the hospital he was standing in.

So there are several lessons here. First, narrow networks aren’t unique to Obamacare. They’ve been a growing problem with private insurance plans for years (see chart on right). Second, it gets worse with Obamacare in some states because of the narrow networks supported by nearly all ACA insurers. For example, JF confirmed to me that he had a Blue Shield plan, but that’s not the whole story. “The blood lab in question is in network for Blue Shield, but not for Blue Shield CoveredCA plans, as per everyone I’ve spoken to about it.”

And most of us aren’t very, very persistent. Especially if, say, we’re in an ER worried that chest pains might be an indication of an oncoming heart attack.

How big a deal is this? I don’t have any way of knowing. But JF is certainly right that it’s the kind of thing that can give Obamacare a bad name if it happens often enough. Unfortunately, there’s no plausible legislative tweak to address this, since Republicans are implacably opposed to improving Obamacare in any way, shape, or form. At best, there might be a way to partially address it with HHS regulations.