Are genetically modified foods safe? As near as I can tell, the scientific community—and no, not just the part of it paid by Monsanto—has been pretty unequivocal on this subject: you can eat GMO foods with no qualms. It’s possible that further research will dispute this, or that long-term effects will show up eventually, but for now there’s no serious evidence that GMO foods are unsafe to stuff down your gullet.

But that’s not the end of the story. Even if GMO foods are safe to eat, there are a host of practices surrounding the use and marketing of GMO seeds and crops that are highly questionable. And those practices frequently fail to get the attention they deserve thanks to intense lobbying from corporate interests with billions of dollars at stake. Over at Wired, Brandon Keim provides an example of this dynamic at work. It’s the story of Bt corn, which was engineered to be poisonous to corn rootworms, a pest that 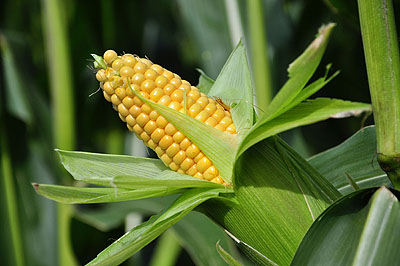 used to cause billions of dollars in damage to corn crops. For a while it worked great. But then, corn rootworms evolved a resistance to Bt corn, largely due to industry and farmer resistance to proper management:

Key to effective management, said the scientists, were refuges set aside and planted with non-Bt corn. Within these fields, rootworms would remain susceptible to the Bt toxin. By mating with any Bt-resistant worms that chanced to evolve in neighboring fields, they’d prevent resistance from building up in the gene pool.

But the scientists’ own recommendations — an advisory panel convened in 2002 by the EPA suggested that a full 50 percent of each corn farmer’s fields be devoted to these non-Bt refuges — were resisted by seed companies and eventually the EPA itself, which set voluntary refuge guidelines at between 5 and 20 percent. Many farmers didn’t even follow those recommendations.

….[Entomologist Elson Shields of Cornell University] also lamented the difficulty he and other academic scientists long experienced when trying to study Bt corn. Until 2010, after organized objections by entomologists at major agricultural universities forced seed companies to allow outside researchers to study Bt corn, the crop was largely off-limits. Had that not been the case, said Shields, resistance could have been detected even earlier, and perhaps stalled before it threatened to become such a problem.

“Once we had legal access, resistance was documented in a year,” Shields said. “We were seeing failures earlier but were not allowed to test for resistance.”

There’s a lesson to be learned for future crop traits, Shields said. Rootworm resistance was expected from the outset, but the Bt seed industry, seeking to maximize short-term profits, ignored outside scientists. The next pest-fighting trait “will fall under the same pressure,” said Shields, “and the insect will win. Always bet on the insect if there is not a smart deployment of the trait.”