Why? Another way of describing what happened is that labor productivity continued rising in the US but declined in the UK. When labor is more productive, you need less of it, and that’s what happened here. But again: why? Jason Douglas passes along some speculation:

Ben Broadbent, the Bank of England’s next deputy governor for monetary policy, showed students at the London School of Economics an interesting chart in a speech he gave back in January that shows that wages as a share of national income actually rose inBritain in the past few years, a period of deep recession and subsequent 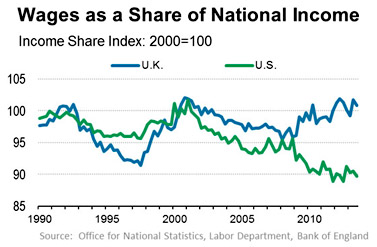 stagnation that Britain is only now climbing out of. Corporate profits’ share of the cake declined. In the U.S., the opposite happened.

Why might this divergence have occurred?….He challenged the students in his audience to come up with an explanation as to why the two economies had such a different experience. One possible explanation, according to economists, is that companies in the U.S. pruned their workforces more severely when the downturn hit than British firms did. British bosses, faced with higher layoff costs and wary of losing skilled staff as they did in previous recessions, decided to keep as many workers on as they could and take the hit instead to their bottom line.

But that still doesn’t answer the question. Why were British bosses wary of losing skilled staff but US bosses weren’t? It’s true that labor markets are more regulated in Britain than they are here, which makes it more expensive to lay off workers, but they aren’t a lot more regulated. In previous recessions and recoveries, Britain and the US followed almost identical trajectories.

Perhaps a more useful framework for analyzing this is to look instead at capital shares, which are the mirror image of labor shares. This means that in the US, the capital share of income has gone up, while in the UK it’s gone down. Even if layoffs and wage growth followed similar paths in both countries, that could happen if capital returns recovered faster on this side of the Atlantic. And that’s plausible: In the US, the financial sector has fully recovered from the recession and is now as big and profitable as it was in the mid-aughts. In the UK, the financial sector was treated more sternly and still hasn’t fully recovered from the recession.

This may be about to change, as US banks run into headwinds and Dodd-Frank regulations start to bite. And in any case, this is mostly just a guess on my part. Still, it strikes me as a potentially more fruitful lens to look through. Thoughts welcome.