After the House finally decided to just pass a damn debt ceiling bill and head out of town, everyone figured the Senate vote wouldn’t produce any drama. But it did, though only in a sad, craven key. It all started when Ted Cruz insisted on filibustering the bill because it gave him a chance to pull off some cheap tea party theatrics, and that’s all Cruz cares about. (Apparently he’s under the sad delusion that this kind of thing might pave his way to 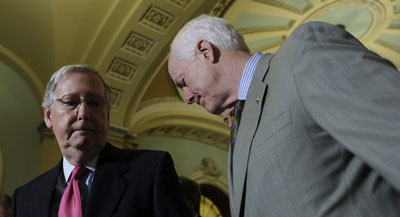 1600 Pennsylvania Avenue.) Then the vote got up 58 ayes, and sort of stalled. Why? Dave Weigel points me to this report from Manu Raju and Burgess Everett:

Miffed that they have long been asked to take tough votes when the GOP leaders voted “no,” Sens. Susan Collins of Maine and Lisa Murkowski, privately pressured McConnell and Cornyn to vote to break the filibuster, sources said. Murkowski resisted voting for the measure without the support of her leadership team.

As the drama grew in the chamber with the vote’s prospects in doubt, McConnell turned to his colleagues and said: “We’re not doing this again,” according to a source familiar with his remarks.

So McConnell and Cornyn — both facing reelection this year and battling tea party-inspired challengers in their states — took the plunge and risked the political backlash by voting to break a filibuster, the type of vote the two wily leaders have long sought to avoid in this election season.

It was a mini-revolt of the backbenchers. There’s a standard bunch of GOP moderates who keep getting asked to take one for the team, and they finally got tired of it. So they told Mitch McConnell they were through bailing out the party unless they got some help. McConnell and Cornyn caved, and that opened the floodgates for a bunch of other Republicans to follow suit. In the end, the debt ceiling increase passed 67-31.

But McConnell managed a small, almost touchingly meager victory. Apparently Harry Reid took pity on him and played along with a plan to keep the votes semi-private by not having the clerk call the roll. Everyone’s votes were still recorded, but at least they weren’t called out in stentorian tones on CSPAN-2. Weigel:

If this sounds pathetic, that’s because it is. Carl Hulse puts it very well here: Most Republicans want the country to keep running, but don’t want to provide tough votes if they can be used against them in primaries. But I’d go further than Hulse. More than ever, most members Congress are structurally protected from any consequences for any votes they take. Like I wrote yesterday, only four incumbent Republicans in the House and Senate, total, lost primaries in 2012. None of them lost only because they voted to raise the debt limit.

Individually, they’re totally safe. Collectively, they often can’t act. So the only real pressure exerted on a party is the external backlash that follows a big, collective failure — the definitive case this year being the government shutdown, the definitive case in 2011 being the collapse of a House Republican debt limit bill.

Four incumbents! But that’s all it takes to make all the rest of them petrified with fear of the Koch brothers and the Club for Growth. Senators these days are like our fabled youth who are supposedly so smothered with parenting that they’re afraid to face the real world on their own. Senators are so smothered with entitlement to their seats that they’re afraid of even the tiniest chance of a primary challenge. The result is a gutlessness in the face of mau-mauing from blowhards like Cruz that makes you want to avert your eyes. Even when it’s being done to a bunch of guys you can’t stand, it’s just too painful to watch.