So Rand Paul filed a lawsuit yesterday against the NSA’s phone record collection program, and he’s already getting flack for parachuting in and trying to steal the limelight from a guy who filed a similar suit months ago. Some other awkward questions are being raised too, including one from Steve Benen, who wonders why this entire effort is being run through his campaign operation instead of his Senate office.

I think the answer to that is pretty obvious, but it also gives me a chance to mention something: Is anyone in Congress right now more of a genius at self-promotion than Rand Paul? Sure, Ted Cruz gets some attention for 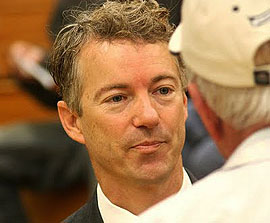 being an asshole, but that’s ephemeral. Nobody’s really very interested in Cruz.

But despite the fact that Paul’s political views make him wildly implausible as a candidate for higher office, everyone finds him endlessly fascinating. He mounts a meaningless “filibuster” and suddenly everyone wants to Stand With Rand. He wants to end the Fed and the tea partiers go gaga. He starts talking about Monica Lewinsky and it prompts a thousand thumbsuckers in the Beltway media. He opposes foreign interventions and somehow manages to hypnotize the punditocracy into thinking that maybe dovishness represents the future foreign policy of the Republican Party. He gets caught plagiarizing and shakes it off. He gets caught hiring an aide who turns out to be a former radio shock jock who specialized in neo-Confederate rants, and it just adds color to his resume.

It’s remarkable. Is he just an amazing, intuitive self-promoter, like Sarah Palin? Is he a case study in how being a nice guy (which apparently he is) gets you way more sympathetic coverage than being a lout (which apparently Ted Cruz really is)? Is this just an example of how bored the media is and how desperate they are for even small bits of sideshow amusement?

Beats me. But backbench senators sure don’t normally attract the kind of coverage that Rand Paul gets unless they’re legitimate presidential prospects. Which Paul isn’t. Not by a million miles, and everyone knows it. Don’t make me waste my time by pretending otherwise and demanding that I explain why he’s obviously unelectable.

But he sure does have the knack of entertaining bored reporters.