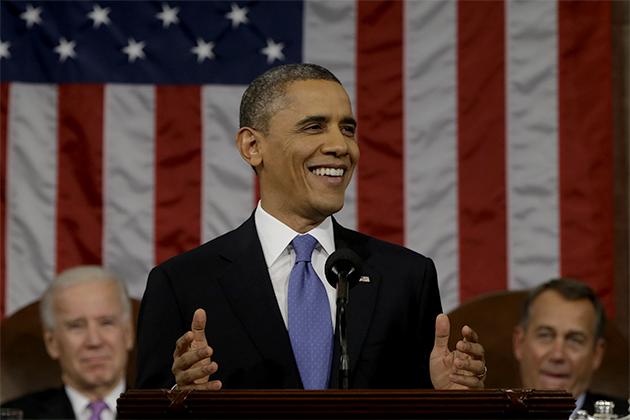 This year I tried something new for the State of the Union address. No liveblogging, no tweeting, no notes, no nothing. I just watched it, like a normal human being.

Did it work? Do I feel like I responded differently to it this way? Maybe. But probably not. I’ve long since been sucked into inhuman analytic mode when I watch these things, and there’s nothing to be done about it now.

So: first impressions first. I’m having a hard time describing the overall sensation I got from this speech. But it was a positive one. Yes, it was mostly fairly small bore, but the domestic section of the speech felt to me like it held together better than usual. Obama announced at the start that he was going to focus on growing the economy and expanding opportunity, and everything he said really did fit that theme. This gave it a bit less of a laundry-list feel than usual. What’s more, it felt a little more relaxed than past SOTUs. Obama lobbed some challenges toward Republicans, but they were fewer than usual, and for the most part they felt a little more good-natured than in the past.

Before the speech, the big buzz was about how Obama was going to focus on executive powers. If Congress wouldn’t give him what he wanted, he’d do it himself with the stroke of a presidential pen. And thanks to that buzz, this is something that every talking head was emphasizing in the postgame wrap-ups. But in reality, there was very little of that in the speech itself. Obama repeatedly used phrases like “if Congress wants to help me, they can _____” but very few of them sounded to me like ultimatums. They sounded like pretty sincere desires to work with Congress, and I’m pretty sure that’s how they came across to viewers who listened to the speech without benefit of all the prespeech framing. If there was an iron fist of executive orders behind this, it was mostly wrapped in a velvet glove.

Obama’s defense of the Affordable Care Act was excellent. And while I usually hate the ordinary citizens who are invited to be props for the SOTU, someone deserves a raise 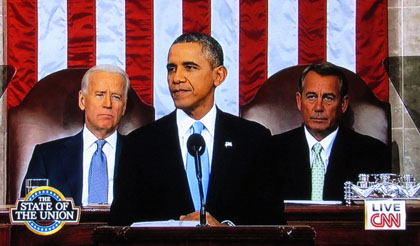 for finding Amanda Shelley and inviting her. Here’s Obama:

A preexisting condition used to mean that someone like Amanda Shelley, a physician assistant and single mom from Arizona, couldn’t get health insurance. But on January 1st, she got covered. On January 3rd, she felt a sharp pain. On January 6th, she had emergency surgery. Just one week earlier, Amanda said, that surgery would’ve meant bankruptcy.

That’s what health insurance reform is all about—the peace of mind that if misfortune strikes, you don’t have to lose everything.

It doesn’t get any better than that. Shelley was a perfect example of what Obamacare is all about.

On the fact-check front, the only thing that jumped out at me was Obama’s reference to women making 77 cents for every dollar that men make. It’s not precisely wrong, but it will certainly open him up to nitpicking about whether it’s fair to use that number. For the record, I think it is fair, though I’ll grant that a little bit of explanation is called for.

The most amusing part of the evening was watching Obama goad John Boehner into clapping for things he didn’t want to clap for. When Obama said, “No one who works full time should ever have to raise a family in poverty,” Boehner could hardly not clap, even though he knew what was coming next: a proposal to raise the minimum wage that he opposes. Ditto for “Citizenship means standing up for everyone’s right to vote” and several others.

Needless to say, we didn’t learn much new on the policy front tonight—though I don’t think anyone expected to. However, one thing in particular stuck out: the surprisingly short shrift Obama gave to immigration reform. It got a grand total of 121 pro forma words in the middle of the speech, and that was it. Was this because he considers it a hopeless cause, or because he didn’t want to politicize it further by dwelling on it? I’m not sure.

Overall, I give Obama pretty good marks. This wasn’t a lofty speech, but that’s not what the current environment calls for. Instead, it was small bore. It was relaxed. It was good-natured. And it stuck to a single theme pretty effectively. Given where we are right now, those were good choices to make.