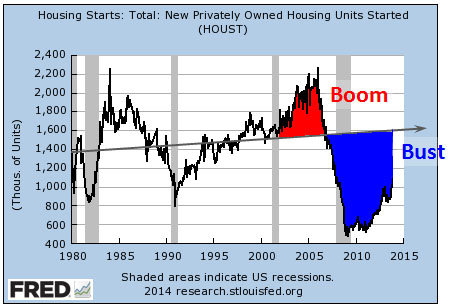 Yesterday I mentioned Brad DeLong’s belief that the biggest problem with the economy right now is the weak housing market:

I find it very hard to escape the conclusion that the big bad thing going on in the third millennium is not the excess construction of the mid-2000s housing bubble–a sum of 7.5% points of annual GDP….but rather the additional 20% points of annual GDP of residences not built since 2007 because of the financial crisis, resulting depression, and breaking of housing finance.

The chart above shows what DeLong is talking about. Housing was overbuilt in the aughts, but we’ve more than made up for that. The shortfall in new housing starts since 2008 is far larger than the excess between 2002 and 2007.

So what’s the problem? Felix Salmon, keying off a New York Times piece today, writes that a big reason for the continuing weakness of the housing market is the inability of even people with good credit to get mortgages.

Anecdotally, it’s much harder to get a mortgage now than it used to be. In the NYT article, the Center for American Progress’s Julia Gordon says that “a typical American family” with a credit score in the low 700s is “being left out”: that’s a very long way from subprime, which is what you’re considered to be when your credit score is below 620.

Meanwhile, here in Manhattan, no one in my condo building has been able to sell or refinance for the past couple of years, thanks to an ever-shifting series of rules at various different banks, all of which are clearly designed to just give them a reason to say no.

The chart below shows this dramatically: 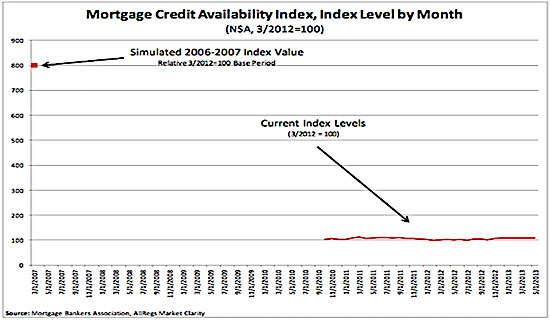 Needless to say, mortgages were too easy to get in 2006, and we don’t want to go back to that level. But neither do we want to be where we are now. Salmon believes the problem is fairly simple: it’s not because of new rules about qualified mortgages or anything else regulatory, it’s simply because 30-year fixed mortgage rates are currently running at about 4.5 percent. “Would you lend money fixed for the next 30 years at a rate of less than 5%?” he asks.

The 30-year fixed mortgage is mostly a creature of Fannie Mae and Freddie Mac, who have historically bought up and securitized 30-year fixed mortgages so that banks didn’t have to keep them on their books. They aren’t doing that as energetically as they used to, and this has depressed the entire mortgage market. So what to do? DeLong suggests the answer lies with the government: “Have Mel Watt’s FHFA end policy uncertainty about housing finance and rebalance the construction sector to fill in our current 20%-point of annual GDP housing capital deficit.” Salmon suggests the answer might be the opposite: “Phase out the 30-year fixed-rate mortgage entirely, since it’s a product no private-sector financial institution would ever offer.” But both agree that the mortgage market is a crucial part of getting the economy back on its feet. Here’s Salmon:

One thing is clear: for all that the Fed has been pumping billions of dollars into mortgage securities as part of its quantitative easing campaign, all that liquidity has failed to find its way to new homebuyers. I’m in general a believer in renting rather than buying, but the US is a nation of homeowners, and in such a country, a liquid housing market is a necessary precondition for economic vitality. Right now, we don’t have one — and we don’t have much hope of getting one in the foreseeable future, either.

With household deleveraging having now run its course, this is a good time to start thinking more seriously about the housing market. It’s not a silver bullet, but there are plenty of families out there willing to fund more residential construction if only they could get a mortgage. Not a go-go-no-doc-no-down bubble mortgage, just a normal mortgage for normal people. This is something that President Obama should probably be thinking pretty hard about.