James Pethokoukis, after citing some research suggesting that a higher minimum wage reduces employment among low-skill workers, wonders why progressives seem so obsessed with the idea:

These studies aren’t some secret. So why do so many smart people keep advocating for a higher minimum wage? The best answer I can come up with is that they think it is more politically likely than the better economic answer: wage subsidies

….[Noah Smith explains:] When a company offers you a wage, the government matching would have already done behind the scenes. Someone comes and offers to pay me $20 an hour, the government is paying $12 of that. I would be making $8 an hour, but I would feel like a person who making $20 an hour. Unlike the Earned Income Tax Credit where you get a check from the government based on how much income you earned, I 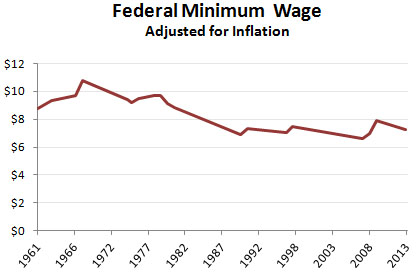 think people would feel a lot better in term of the framing of it if the government matched their wages instead.

I’d make several points about this. First, as Pethokoukis says, no one thinks wage subsidies are politically feasible. If there’s even a single Republican politician who favors them, I’d like to hear about it. Conversely, even if the minimum wage is a second-best alternative, it’s well-known, popular, widely understood, doesn’t require higher taxes, and is part of the political status quo. It wouldn’t be easy to raise the minimum wage, but it’s not impossible either.

Third, wage subsidies can be tricky to implement. Are they temporary or permanent? Targeted or universal? Are they in addition to the EITC or a replacement? How do you prevent employers from gaming the system and reducing wages because they know the wage subsidy will make up the difference? There may be answers to these questions, but they aren’t trivial.

Finally, wage subsidies haven’t been widely adopted elsewhere, which means there isn’t a lot of compelling research to show how well they’d work. There are good reasons to be optimistic about wage subsidies, but as far as I know, they’re still fairly untested.

In any case, I really think the first point is the critical one. Wage subsidies would supposedly distort the labor market less than a higher minimum wage, but that’s because it would remove the onus of higher wages from employers and place it on the federal government. That means higher taxes to pay for the subsidy, and that’s just flatly a no-go for the modern Republican Party. This in turn means it could be implemented only as a tax credit, and that inherently places some restrictions on its reach and effectiveness. So Democrats would be in the position of backing either a good policy that will never get Republican support because it requires a tax increase, or else a mediocre policy that would still probably be a very heavy lift.

Incentives matter in politics as much as they do in the market economy, and there’s no incentive for Democrats to expend political capital on a policy change that’s highly unlikely to ever get any Republican backing. If and when that changes, perhaps wage subsidies will become a live option. Until then, a higher minimum wage is the only game in town.