Over at Pacific Standard—a pretty good magazine that you should check out—Michael White shows us what’s happened to the National Insitutes of Health ever since 1998, when Congress decided on a bipartisan basis to double its research budget over five 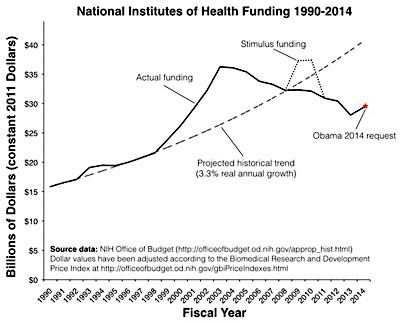 years. The budget was indeed doubled, but when the five years was up its funding was immediately put back on its old path. Then, when the recession hit, it was cut even further:

The tighter competition for funding has put the squeeze on younger scientists with fledgling labs; the proportion of young scientists with NIH grants is half of what was in 1998, while the proportion of funded scientists over 65 has doubled. Because scientific training typically takes over 10 years, students who decided to enter graduate school in the boom days of the mid-Aughts are now entering a job market that looks nothing like what they expected.

On the ground in my daily work in both a university medical school and a public hospital, it’s a rare month that some bright young person doesn’t tell me they are quitting science because it’s too hard to get funded. These are usually not reversible decisions. Even a well-trained young physician who leaves research for 5 years to treat patients full-time is very hard to tempt back into science if the funding picture improves (and is even harder to bring back up to speed on the cutting-edge scientific questions and methods of the day).

….A decade or two from now, when an antibiotic resistant bacteria or new strain of bird flu is ravaging humanity, that generation will no longer be around to lead the scientific charge on humanity’s behalf. That’s why we constantly need a new stream of young people committing to health science careers. That seed corn is currently being consumed at an alarming rate, and if we don’t act immediately to rectify the situation we will suffer for many years to come from the loss of a generation of health researchers.

Because NIH grants typically last a long time—five to ten years or more—budget reductions have an oversized effect on new research proposals. When funding goes down thanks to austerity-obsessed politicians, existing grants have to keep getting funded, which means that virtually no new money opens up for new projects. And this is coming at the same time that the drug pipeline is slowing down, antibiotic-resistant superbugs are surging, and we’re still struggling to figure out how to make use of the genomic revolution.