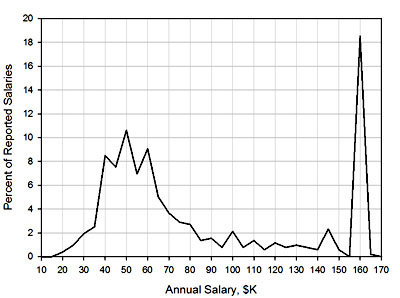 Via Tyler Cowen, here’s a chart of starting salaries for attorneys from Peter Turchin. It shows what’s now a fairly familiar bimodal distribution: there’s a relatively normal spread of salaries on the left centered at $50K and declining close to zero at $100K. And then there’s a second peak on the right.

This bimodal distribution didn’t exist 20 years ago, and there are several theories to explain how it evolved. But that’s not what I’m interested in for the moment. What I’m curious about is how sharp the second peak is. It’s not really a second distribution at all. Nearly 20 percent of starting attorneys belong to the super-elite group that gets high pay, but they all get exactly the same high pay: $160,000. Why is that? Can it really be the case that all of these super elites are precisely as elite as each other? Is there really not even a whit of sub-competition for this lucky 20 percent that would produce a few of them getting $180,000 or $200,000?

Why is the second peak so sharp? Normally, I’d toss out a few ideas, but I can’t really think of any aside from some kind of weird cultural collusion among top law firms. But that doesn’t really sound right. So what’s going on?

UPDATE: Based on comments, the answer seems, indeed, to be “weird cultural collusion among top law firms.” Except that it’s not really all that weird. It’s like one gas station lowering its price and suddenly all the other gas stations on the same corner start charging the exact same price. There are only a few dozen super-elite law firms, and they pretty much all offer the exact same super-elite starting salaries. From comments:

The Commentor: The primary reason for the spike is that large law firms have a herd mentality. No one wants to be below the market when recruiting from the 14 or so schools we all recruit from. There is close to perfect information about the salaries at the firms on the Internet and if the market leaders pay 160K for a kid from one of these schools, then the other top 50 or so firms will all largely pay the same too….Truth be told a very small percentage of graduates get into top law firms. We are hiring far fewer than we used to. They have next to no chance to make partner, and most try to stay long enough to pay off their 200K+ of student debt before we fire them or they leave.

Mannahatta: There are multiple outlets (websites, magazines, directories) that publish starting salaries for big law firms. So, there absolutely is a level of implicit collusion that goes on between law firms. For the most part these firms are difficult to distinguish for law students, and it’s difficult for firms to make fine distinctions between someone with a certain GPA from one law school or another. So firms tend to compete for graduates on the basis of potential bonuses, what the firm has to offer in terms of specialties, training, etc., rather than starting salaries.

Read the full comments for more details. Via email, a couple of folks who work in Big Law say that Cravath has traditionally been the first mover in this super-elite competition. “But, during the real estate bubble that led to a biglaw bubble, Simpson Thacher, another top firm, started offering $160k in an attempt to jump Cravath. To stay competitive, everyone had to follow suit.”