In the current issue of Education Next, Dan Goldhaber and Joe Walch report that the quality of new teachers has improved over the past decade:

We find that more academically competent individuals are being drawn into the teaching profession….driven mainly by the proportion of teachers with SAT scores that fall in the top quartile of the distribution. This finding of increasing academic competence for newer entrants to the teacher labor market also shows up when we use undergraduate GPA as our indicator of academic competency, though research by Cory Koedel indicates that inconsistent grading standards across academic majors may render this measure less meaningful.

G&W’s research suggests that schools are drawing fewer teachers from the bottom quartile of SAT scores and more teachers from the top quartile. You can see this in the thick red line in the chart on the right (taken from the original paper), which shows the number of teachers from the class of 2008 with different SAT scores: compared to 1993 and 2000, there are 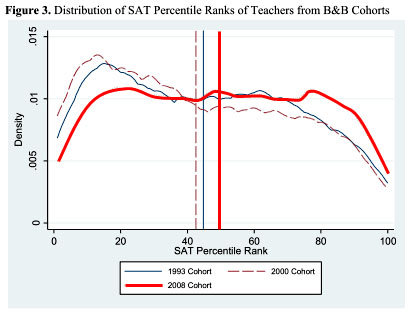 fewer from the lower ranks, about the same number from the middle ranks, and more from the higher ranks. Megan McArdle suggests this is mainly due to the Great Recession:

As insecurity in the private-sector labor market increases, the value of public-sector job protections effectively increases, meaning that candidates will be willing to accept lower pay in exchange for the guarantee that it will be nearly impossible to fire them….It’s also possible that a lot of college students suddenly and for no apparent reason decided they wanted to be teachers around the same time that the job market became massively more insecure. But I’m betting it’s no coincidence. Bad news for the graduating seniors, but good news for the nation’s schools.

This is reasonable sounding. However, the most recent data is for teachers hired in 2008, which predates the big spike in unemployment starting in 2009. So I’m not quite convinced. I’d like to see data through 2013 to confirm what’s going on. Given the steep rise in private-sector unemployment and the precipitous decline in private-sector job security over the past five years, we should expect to see schools becoming even more selective about who they’re willing to hire. If the recession story is true, the data should show at least another 5 percentile point increase in the SAT scores of new teachers.