Until now, I’ve mostly avoided tackling some of the broader problems with Lara Logan’s now-infamous report on Benghazi for 60 Minutes. It was, as I mentioned in my very first post the day after it aired, written as though the script had come from the Republican National Committee, full of unsourced allegations, questionable interpretations, and wink-wink-nudge-nudge suggestions of scandal. Nearly everything in the segment was old news that had been extensively litigated in the months before, but you’d never know that from watching 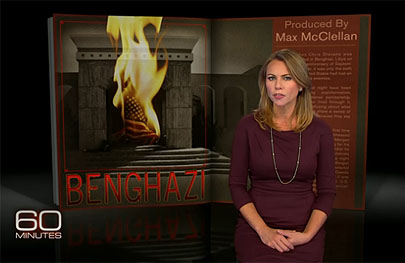 it because opposing viewpoints were almost entirely absent. Logan’s later assertion that “We killed ourselves not to allow politics into this report” is simply laughable.

But all of that paled compared to the revelation that Dylan Davies, the main source for the segment, had flatly lied about his role on the night of the attacks, and that’s attracted most of the attention since then. Today, though, McClatchy’s Nancy Youssef takes a deep dive through Logan’s story and finds problems with nearly everything she reported. In particular, Logan’s repeated insistence that the attack was a well-planned Al-Qaeda assault is questionable at best:

The report repeatedly referred to al Qaida as solely responsible for the attack on the compound and made no mention of Ansar al Shariah, the Islamic extremist group that controls and provides much of the security in restive Benghazi and that has long been suspected in the attack….It is an important distinction, experts on those groups said. Additionally, al Qaida’s role, if any, in the attack has not been determined, and Logan’s narration offered no source for her repeated assertion that it had been.

….Logan claimed that “it’s now well established that the Americans were attacked by al Qaida in a well-planned assault.” But al Qaida has never claimed responsibility for the attack, and the FBI, which is leading the U.S. investigation, has never named al Qaida as the sole perpetrator. Rather, it is believed a number of groups were part of the assault, including members and supporters of al Qaida and Ansar al Shariah, as well as attackers angered by a video made by an American that insulted Prophet Muhammad….Moreover, questions remain over how far in advance the attack on the U.S. compound had been planned. Rather than a long-planned attack, investigators have told McClatchy it was likely planned hours, rather than days, in advance.

….Another questionable assertion in the “60 Minutes” report was Logan’s unsourced reference to the Benghazi Medical Center as being “under the control of al Qaida terrorists”….The piece also named three known insurgent operators as top suspects in the attack but did not explain the source of that assertion….According to the piece, “When a member of our team went to the U.S. compound earlier this month, he found remnants of the Americans’ final frantic moments still scattered on the ground”…. McClatchy visited the site in June and saw a pile of debris sitting outside the compound walls, but no documents were discernible among the broken concrete, clothing, furniture and soot.

….Davies had claimed in the “60 Minutes” piece that he had gone to the diplomatic compound site during the attack, climbed a 12-foot-high wall and struck one of the attackers in the head with his rifle butt before discovering Stevens’ body at the hospital. All of the claims contradicted multiple reports that have emerged in the year since the attacks.

Read the whole piece for all the details. The bottom line is that Logan’s report was plainly trying to make a case for a long-planned Al-Qaeda attack in a city largely controlled by Al-Qaeda operatives. The evidence for that is dubious at best, and no contrary evidence made it into the finished piece. What’s more, there was plenty of reason to be skeptical of Davies’ claims, but Logan simply accepted them at face value.

Youssef reports that CBS told her it is undertaking a “journalistic review” of Logan’s Benghazi report, “the network’s first acknowledgement that concerns about the report may go deeper than just the discredited interview with security supervisor Dylan Davies.” That’s good to hear. There was a lot more wrong with that segment than just Davies’ tall tales.