Republicans have now made clear that they’re willing to filibuster all of President Obama’s nominees to the DC circuit court. This is not because they have any specific objections to them, but simply because they want to preserve the court’s conservative majority even though they lost the election. Greg Sargent reports that this is such a sweeping position 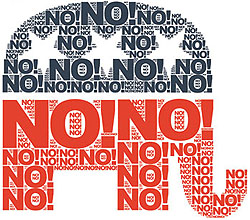 that Harry Reid no longer thinks there’s any chance of brokering a compromise on the matter. The only option left, according to a senior leadership aide, is to go nuclear and do away with the filibuster entirely:

“Reid has become personally invested in the idea that Dems have no choice other than to change the rules if the Senate is going to remain a viable and functioning institution,” the aide says….Asked if Reid would drop the threat to go nuclear if Republicans green-lighted one or two of Obama’s judicial nominations, the aide said: “I don’t think that’s going to fly.”

Reid has concluded Senate Republicans have no plausible way of retreating from the position they’ve adopted in this latest Senate rules standoff, the aide says. Republicans have argued that in pushing nominations, Obama is “packing” the court, and have insisted that Obama is trying to tilt the court’s ideological balance in a Democratic direction — which is to say that the Republican objection isn’t to the nominees Obama has chosen, but to the fact that he’s trying to nominate anyone at all.

Reid believes that, having defined their position this way, Republicans have no plausible route out of the standoff other than total capitulation on the core principle they have articulated, which would be a “pretty dramatic reversal,” the aide continues.

But does Reid have the votes? The New York Times reports that Republican obstruction has finally gotten so outrageous that even previously cautious Democrats are now supporting Reid’s position:

Mr. Reid, of Nevada, has picked up crucial support from some of his more reluctant members recently. Senator Patrick J. Leahy, Democrat of Vermont and the longest-serving member of the Senate today, who is chairman of the Judiciary Committee, has endorsed putting limits on the filibuster despite his history of being protective of Senate institutions. The two senators from California, Dianne Feinstein and Barbara Boxer, said separately on Tuesday that they were leaning toward a rules change.

….The stakes seem higher this time for many Democrats. Many of them strongly believe that if Mr. Obama is not able to appoint any judges to the court — Republicans have rejected four of the five nominees he has submitted — it will retain its conservative bent for decades. It is a crucially important court for any White House because it often decides cases that relate to administration or federal agency policies.

At various points over the past year, Republicans have refused to confirm any nominees to the NLRB so that it would lose its quorum and be unable to pass new rules; they have refused to confirm any chairman of the CFPB in order to prevent it from functioning at all; they have threatened to destroy America’s credit unless Obamacare was defunded; and now they’re refusing to confirm any nominees to the DC circuit court in order to preserve its conservative tilt. Reid eventually managed to cut deals on the NLRB, the CFPB, and Obamacare, but as Feinstein says, “We left with a very good feeling there would be a new day. Well, the new day lasted maybe for a week.”

Add all this up—the NLRB, the CFPB, the debt ceiling extortion, and the DC court filibusters—and it’s now clear that Republicans have no intention of allowing Obama to govern normally. Instead, they have adopted a routine strategy of trying to nullify legislation they don’t like via procedural abuse. As Sargent puts it:

The GOP position is not grounded in an objection to Obama’s nominees or to the function of the D.C. Circuit Court of Appeals; it’s grounded in the argument that Obama should not have the power to make these appointments to the court at all. As Jonathan Chait argues, Republicans may not have even thought through the full implications of the position they’ve adopted. But Dems have, and taking it to its logical conclusion, they believe Republicans have presented them with a simple choice: Either they change the rules, or they accept those limits on Obama’s power. And that really leaves only one option.