It reveals that in the United States in 2012 we produced a staggering 49.5 billion pounds of chicken meat worth an aggregate of $24.8 billion.

By contrast, we raised a paltry 7.3 billion pounds of turkey worth just $5 billion.

If everybody likes turkey so much, then why aren’t you buying any?….Here at Slate we think it’s very important to be clear on what’s a contrarian take and what’s the conventional wisdom. And the conventional wisdom is that turkey is bad and you should eat chicken if you’re interested in some not-very-flavorful poultry. 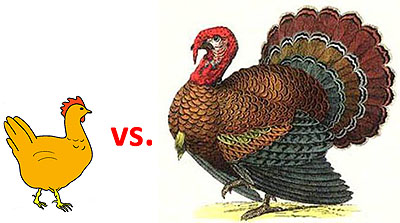 People eat turkey on Thanksgiving because it’s traditional, but people do not enjoy eating turkey.

Unfortunately, there’s a confounding variable that Matt has failed to consider: as the illustration on the right demonstrates scientifically, turkeys are big. One reason that we don’t buy turkeys routinely throughout the year is that your average household of 2.58 members doesn’t want that much of anything. Most of us don’t cook big standing rib roasts very often either, but that’s not because we don’t like beef. It’s because they’re too damn big for everyday consumption. Add to that the fact that roasting a turkey is a pain in the ass, and you just aren’t going to have turkey very often.

Now, that said, it’s hard to escape Matt’s central contention that turkey isn’t really all that tasty. Most of us eat it only alongside forkfuls of cranberry sauce or drenched in gravy, which pretty much gives the game away taste-wise, doesn’t it?

Still, this raises yet another question. Of that 49.5 billion pounds of chicken, I’d guess that a sizeable fraction of it is consumed in the form of chicken nuggets of some variety. So why aren’t there turkey nuggets instead? Once you batter it and toss it in a deep fryer, turkey would taste just fine.1 And that brings up a second reason that we eat more chicken than turkey—one that should be of special interest to a Moneybox columnist: it’s cheaper. According to that Ag Department document above, chicken goes for 50 cents per live-weight pound while turkey sells for 73 cents.

In other words, we don’t really need to get into inherently personal arguments about the relative tastiness of chicken vs. turkey. Chicken is both cheaper and far more convenient than turkey for your average consumer, and that’s enough. It’s no surprise that it’s the world’s poultry of choice.

1Wouldn’t it? I’m no foodie, and anyway, I happen to like nibbling on turkey leftovers from the fridge with nothing more than a little salt as seasoning. But maybe there’s something about turkey meat that makes it poorly suited to the indignities of nugget-dom. Anyone happen to know?