Maeve Reston of the LA Times travels to Oklahoma to find out how Obamacare is doing in a deep red state:

The state attorney general is leading one of the last state challenges against the law in federal court. The state insurance commissioner issued a sharply worded warning to federally funded “navigators” who are helping people sign up for insurance. And frightening rumors about the law — uncountered by any positive spin — are dissuading some residents from considering it.

….States like California are spending millions to promote the law, but here it is difficult to find a trace of information about it beyond cable news….There are no billboards along the highways, no public service announcements on the radio. At a number of health clinics, there were no fliers last week about the law’s insurance marketplaces.

….In dozens of interviews here, many said they feared they would be forced to buy insurance they couldn’t afford. Some said they were told (erroneously) that insurance penalties would come out of their Social Security checks; others said they’d heard the law meant they’d soon have to travel several hundred miles to see a doctor.

….Leaders in the two consortiums that received federal money for a public education campaign in Oklahoma were still in the early phase of training as residents became eligible to sign up for insurance this week….”Around the first of the year,” he added, “maybe we’ll do some 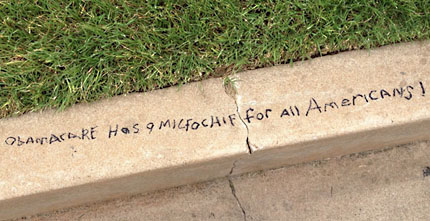 more speaking engagements, or hanging some signs, or maybe some advertisements on the radio.”

The anti-Obamacare troops are well funded. Above-board advertising campaigns fueled by Koch money are joined by shadier rumor-mill campaigns that no one wants to publicly take credit for. Deliberate misinformation is rampant. You won’t be able to see your doctor. The IRS will put a lien on your house. Old people will be denied care and left to die. All the money is going to undocumented immigrants. Part-time workers will lose their jobs. Doctors will be required to collect information about your guns. Microchips will be implanted in patients. Etc.

In the meantime, the pro-Obamacare troops, hobbled by their lack of enthusiasm for anything less than full single-payer national health care, have mostly left things in the hands of state and federal officials. These folks don’t yell or scream, and they don’t try to debunk crazy conspiracy theories. They have a more genteel approach, and in the long run it will probably work. In the meantime, though, the messaging war is a very one-sided fight indeed. In Oklahoma, it’s hardly even a fight at all.