The OECD has a big new study out about literacy and numeracy in developed countries, and the United States didn’t do very well:

The study, perhaps the most detailed of its kind, shows that the well-documented pattern of several other countries surging past the United States in students’ test scores and young people’s college graduation rates corresponds to a skills gap, extending far beyond school. In the United States, young 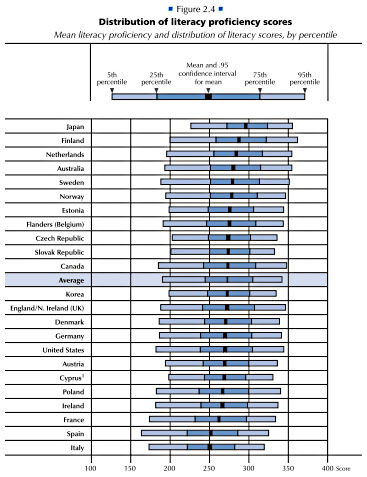 adults in particular fare poorly compared with their international competitors of the same ages — not just in math and technology, but also in literacy.

More surprisingly, even middle-aged Americans — who, on paper, are among the best-educated people of their generation anywhere in the world — are barely better than middle of the pack in skills.

This is why the second paragraph of the excerpt above doesn’t surprise me. It also wouldn’t surprise me if the same thing were true 50 years ago. There’s a widespread myth that America used to be the best educated country in the world and has since slipped into mediocrity, but as near as I can tell it’s just a myth. America’s kids have always been fairly middle-of-the-pack. Ditto for America’s adults. My guess is that this is largely due to averages being pulled down by enduring levels of inequality and the legacy of racism, but that’s just a guess.

So I’m honestly not sure what to think about this. Low literacy levels are obviously a serious issue. This isn’t something that should be casually dismissed. And yet….as you can see in the chart, the difference in literacy levels between countries is fairly small except at the very top and bottom, and the United States is sandwiched right in between Denmark, Germany, and France. Does anyone think that Denmark and Germany are educational hellholes doomed to decline and poverty?

As an aside, one odd result in this study is that America does worse in numeracy than in literacy. This is odd because if you look at NAEP test scores over time, it’s the math scores that have gotten substantially better. If there’s an area where you’d think the United States would be in relatively better shape, it’s math.

For now, I’ll wait for some more expert commentary. I’ve seen too much of this stuff to panic about it without digging a little deeper, and especially without knowing if it’s truly an alarming new development, or just the same results as always.