McDonald’s operates a help line called McResource that offers advice to their employees. Among other things, that means directing workers to government programs that can help them, such as food stamps. At the Guardian, Sadhbh Walshe wants to know why conservatives are OK with this. If they hate welfare programs, why are they “seemingly okay with hugely profitable corporations exploiting these programs while they underpay their workers?” This is in the context of an argument for raising the minimum wage to $15, but Adam Ozimek says it’s misguided:

Conservatives believe that minimum wages lead to more unemployment, and people on unemployment are going to rely on more not less public assistance….So if you’re going to try to sell them on an argument that a higher minimum wage will lead to less food stamps you’re wasting your time. You may succeed in raising their ire more about food stamps, but you’re simply not going to sell them on a minimum wage with these arguments. My guess is those who write or cheer pieces like this are simply too cloistered in their own ideological bubbles to understand that. 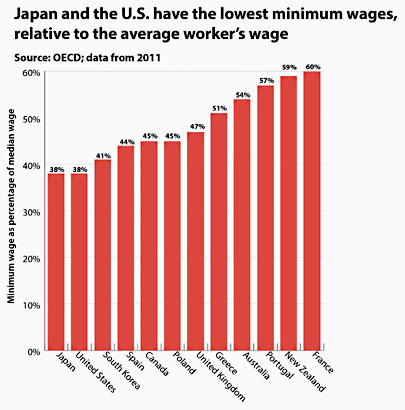 Maybe. At a guess, though, it doesn’t really make any difference. Conservative politicians don’t oppose increases in the minimum wage because they think it increases unemployment. After all, they oppose even modest increases that, by almost unanimous consensus, don’t have any noticeable effect on unemployment. The truth is that they simply oppose business regulations, and the minimum wage is a business regulation.

Of course, this still means that Walshe’s argument is falling on deaf ears. That’s OK, though, because she’s only talking to conservatives in a rhetorical sense anyway. It’s the Guardian! The real goal here is to keep pressing a campaign that, eventually, might move the Overton Window among liberals and centrists. Those are the people who might nod along with the minimum wage argument.

So what’s the answer? Should we substantially raise the minimum wage? In one sense, I doubt that it would make a big difference. If you raise the wages of fast food workers, you help fast food workers. But you also raise the price of fast food. And who buys fast food? Mostly poor and middle-class folks. But our biggest problem of the past few decades has been a massive redistribution of economic gains to the rich, and since the rich don’t eat much fast food, this would mostly leave them unaffected.

Still, it would help a bit, and certainly there are other minimum wage occupations that affect the rich more than fast food. And since most minimum wage jobs are in the nontradable sector these days, a big increase isn’t likely to send jobs overseas. For the most part, the kinds of jobs that can be lost to China and Indonesia are either already gone or already pay more than minimum wage.

The bigger wild card is whether a substantially higher minimum wage would make automation more cost effective, thus replacing workers with machines at a higher rate. Regular readers know that I think the use of automation is going to accelerate no matter what we do, and with a tail wind like that already in place, it’s certainly possible that a big increase in the minimum wage would put people out of work even faster. But at this point, nobody knows. We simply don’t have enough experience to understand what would happen.

I am, generally, in favor of paying people for work rather than giving them means-tested welfare benefits. For that reason, I like the idea of a higher minimum wage, just as I like the idea of the EITC. At the same time, though, I doubt that this would be a truly progressive reform. Welfare benefits are paid out of the general fund, which means that the money comes from income tax receipts. In other words, it primarily comes from the well off, who pay the bulk of the income tax. A higher minimum wage, by contrast, mostly raises the price of goods and services. This hits everyone equally—or maybe even regressively.

I’m still in favor of a higher minimum wage because I believe there’s a minimum amount that any working adult should expect to receive for an hour’s labor. But it’s no panacea. For all its faults, our current system of social welfare is pretty progressive, and given the enormous redistribution of wealth we’ve seen over the past 30 years, that’s probably the most important feature to keep in mind. Ironically, it’s also a reason that conservatives should prefer a minimum wage increase: because it’s less progressive than food stamps or Section 8 vouchers. We’ve come full circle to Walshe’s original argument.

POSTSCRIPT: For the record, I should note that I mostly agree with Ozimek’s post. “Food stamps are an excellent program. It really is the sort of basic safety net that should have near 100% support. The recent cuts to the program only amounted to a 5% change, but there are larger changes being considered. Let’s not try to undermine this program further by putting it on the corporate welfare radar of Tea Party republicans.”