We all know that plenty of people disapprove of Obamacare. But do they want lawmakers to make the best of it, or do they want them to “do what they can to make the law fail”? According to Pew, only 23 percent of Americans want elected officials to work hard for failure.

Ed Kilgore points out that “make it fail” is loaded language, which might have pushed that number down. Fair point. But even so, among tea partiers a rather stunning 64 percent want elected officials to actively work for the law’s failure. And 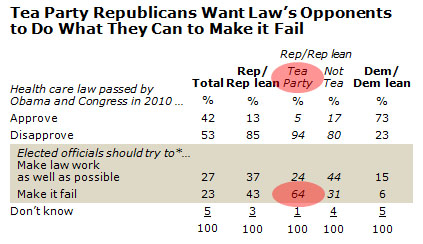 since congressional Republicans are basically slaves of the tea party at this point, I guess we all know what this means, don’t we?

It means that new rounds of shutting down the government and taking hostages over the debt ceiling are pretty damn likely later this year. This stuff is all driven by the tea party wing of the GOP, and that wing is dead set on sabotaging Obamacare above all else. They will tolerate no stone left unturned in their drive to defund, defang, or otherwise destroy Obamacare.

Is there a silver lining to all this? Maybe. Given the tiny percentage of non-tea-partiers who approve of the deliberate sabotage strategy, a scorched-earth campaign by Republicans could backfire on them pretty badly. It all depends on how well the rollout of Obamacare goes, and how that affects public opinion. That makes the next few months pretty critical for both sides. If the rollout is relatively smooth, support for Obamacare will rise—especially among the people who benefit from it, many of whom are still skeptical that it’s for real. But if the Fox News crowd manages to convince the public that every minor problem represents an epic disaster unfolding in front of their eyes, then who knows? Maybe the sabotage strategy will pan out.

But I will say this: We know for certain that opponents of Obamacare will be screaming from the rooftops about every setback. Their goal is to make Obamacare look like a catastrophe of Biblical proportions, and they harbor no doubts about the righteousness of their cause. If liberals want to win this battle for public opinion, they’d better be ready to fight back just as hard. At this point, it doesn’t matter much what you thought of the law in the first place. This is a war between left and right for the heart and soul of America. It’s a good time to make sure you’re clear about which side you’re on.

Sorry about that. The text has been corrected.