The Economist writes about robots:

No matter how flexible, easy to program and safe they are, collaborative workers may not be welcomed by human workers to begin with. The experience of Alumotion, an Italian distributor of UR’s robots, is illustrative. Workers fear being replaced by robots, says co-owner Fabio Facchinetti, so his salespeople carry demonstration units in unmarked cases and initially only meet a potential client’s senior management behind closed doors.

Roger that. So how do we make humans more accepting of robots? Part of the answer, as near as I can tell, is the usual: other, higher ranking humans will tell lies about how the robots will never, ever take away your job. They’ll just help you do your 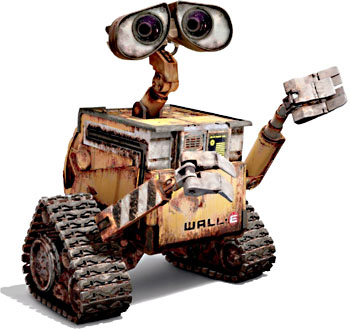 job better! But there’s also this:

Workers generally warm to collaborative robots quickly….And because workers themselves do the programming, they tend to regard the robots as subordinate assistants. This is good for morale….To keep human workers at ease, collaborative robots should also have an appropriate size and appearance. Takayuki Kanda of the ATR Intelligent Robotics and Communication Laboratories in Kyoto says that collaborative, humanoid robots should generally be no larger than a six-year-old, a size most adults reckon they could overpower if necessary.

….It turns out, for example, that people are more trusting of robots that use metaphors rather than abstract language, says Bilge Mutlu….He has found that robots are more persuasive when they refer to the opinions of humans and limit pauses to about a third of a second to avoid appearing confused. Robots’ gazes must also be carefully programmed lest a stare make someone uncomfortable.

….When a person enters a room, robots inside should pause for a moment and acknowledge the newcomer, a sign of deference that puts people at ease….It is vital that a robot of this sort is not perceived as hostile, but as having its owner’s best interests at heart….One way to do this is to give robots a defining human trait—the ability to make mistakes. Maha Salem, a researcher under Dr Dautenhahn, programmed a humanoid Asimo robot, made by Honda, to make occasional harmless mistakes such as pointing to one drawer while talking about another. When it comes to household robots, test subjects prefer those that err over infallible ones, Dr Salem says.

So this is how robots will eventually become our overlords. They will keep themselves small and supposedly easy to overpower. They will traffic in charming metaphors. They will pretend to care about our opinions. They will avoid eye contact. They will feign deference. They will simulate charming clumsiness. And, of course, they will mount a massive PR campaign aimed at getting Hollywood to portray robots not as the relentless killing machines they are, but as harmless, friendly little eco-bots. They will do all this while Skynet takes over behind the scenes. You have been warned.