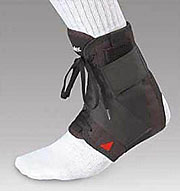 Health care. I got a bill from Kaiser Permanente on Friday. This is odd, since Kaiser is an HMO and all expenses are normally covered except for copays. So I scanned the bill, and it turned out to be part of the follow-up exam on my sprained ankle. The consulting doctor told me that it would be a good idea to keep the ankle braced a bit while it was recovering, so he sent me home with an ankle gauntlet. This is an item that will set you back about 40 bucks in your local CVS. Kaiser, however, thinks I should pay them $191 because….well, just because. And since we all know how much good it does to argue with large corporations, I assume there’s nothing I can do about this. In a nutshell, this is why American health care sucks.

They came down for a hundred years by an average of 70 percent, and then starting around 2002, they shot up and basically everything tripled—and I mean, everything….They’ve given back a hundred years of price decline and they gave it back between ’02 and ’08, in six years. The game has changed.

….We went through one by one, and we decided the most important, the most valuable and the most critical was phosphate or phosphorous….We do have a lot, but 85 percent of the low-cost, high-quality phosphorous is in Morocco…and belongs to the King of Morocco. I mean, this is an odd situation. Much, much more constrained than oil in the Middle East ever was—and much more important in the end. And the rest of the world has maybe 50 years of reserve if we don’t grow too fast.

….The investment implications are, of course, own stock in the ground, own great resources, reserves of phosphorous, potash, oil, copper, tin, zinc—you name it.

Poverty and education. From Matt Bruenig: “Let’s focus our attention on [the claim] that education is a way to reduce poverty. In fact, we have dramatically ramped up educational attainment in the US in the last forty years or so and poverty has not taken a dive. As a basic logical matter, being more educated doesn’t make you less poor. Having more money makes you less poor. So education, even if you think it is necessary, is not sufficient to end poverty. You need distributive institutions that actually generate a specific distributive result, and education is certainly not sufficient for ensuring that happens. A more educated populace will probably be more productive, but that too — as we have seen for the last four decades — is not sufficient for ensuring the gains of such productivity increases flow to the non-rich. Education is good, but sufficient for solving poverty it is not.”

String theory. And since everyone liked Wednesday’s post about the amplituhedron, how about a cover of Bohemian Rhapsody that explains string theory? Enjoy.