Under Obamacare, large employers are required to provide health insurance for every employee who works more than 30 hours a week. This provides an unfortunate incentive to cut worker hours so that they’re just under the 30-hour limit, but Brad DeLong doesn’t think this is likely to be a big problem:

I am confident that as ObamaCare is implemented we will see some firms reconfigure themselves to rely more on part-time and less on full-time workers—and that this distortion will be one of the costs of ObamaCare. But I don’t expect this to be a large effect. And I do not believe that we are seeing it yet. The rise in the relative number of part-time workers looks to be, so far, due 100% to the depression plus statistical noise due to the small sample of the Current Population Survey.

I think this is right. There are several anecdotes making the rounds of Fox News about companies who are cutting worker hours in response to the Obamacare mandate, and some of them may even be true. But so far, the evidence suggests that the effect is very, very small. A CEPR study last month looked at the number of people working 26-29 hours per week, figuring that if hours were cut back, they’d probably be cut back to just under 30. If Obamacare were having an effect, we’d expect to see a rise in the number of workers in the 26-29 hour bucket, but that’s not what CEPR found. The percentages turned out to be essentially identical between 2012 and 2013. 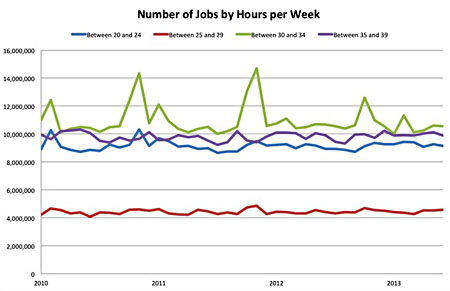 What’s more, the total number of people working that many hours is so small that even if the change were fairly large, it would be barely noticeable.

Brad himself looks at the raw number of people employed part time and sees nothing beyond the effect of the Great Recession. He also points us to Evan Soltas, who crunched the numbers and produced the chart on the right, which simply doesn’t show any noticeable shift toward part-time work. Soltas thinks we’ll probably see an effect on full-time work eventually, and I agree, but it’s likely to be very small.

There’s a moral to this story. Two morals, really. First, conservatives are going to trumpet every employer who announces some kind of cutback, regardless of whether they ever follow through on it. But as with most Obamacare doomsaying, it should be taken with a whole shaker of salt. Second, a lot of liberals agree that the 30-hour rule is bad policy, and should either be repealed or reformed. If conservatives were interested in making good policy, it would be pretty easy to team up with a bunch of Democrats and pass something that would improve the way the law works. But they aren’t. They want horror stories, not good policy.