It’s hard to keep up with the latest in right-wing looniness. But Andrew Sullivan helps out by highlighting American Betrayal, a loopy new book that updates and then turbocharges 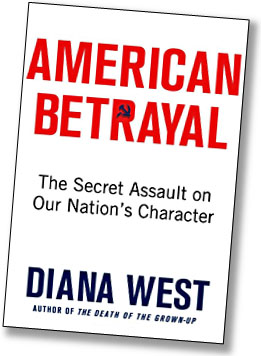 the whole Yalta-treason-conspiracy-so-vast fever swamp of the late 40s and 50s:

Take a new book by Diana West about how the Soviet Union “occupied” America under FDR and dictated foreign policy to serve communist interests….And then you begin to inquire further and your eyes widen a little. A few paragraphs into reading the debate, you realize that all of this is connected with the claim of a current huge conspiracy lying in plain sight — the Muslim Brotherhood’s grip on the White House. Obama is a closet Islamist, just as FDR was a closet Stalinist. It all makes sense now!

….So do yourself a favor and get a glimpse of the insanity now dominating what was once a vibrant intellectual culture by reading Ron Radosh’s devastating review of the book. (David Horowitz gives his side of the kerfuffle here.) Front Page offered West equal space to respond but she wisely refused (see her position here). After reading Radosh, you realize why. She’s got nothing. But she still has much of the movement right on her side.

This morning he added an update:

I was dismayed by how isolated the push-back against the book — by David Horowitz and Ron Radosh — seemed to be on the right. So it’s worth revisiting the debate after a few days to check in on developments. First up: some good news today. Conrad Black’s review in NRO surely counts as a serious public counter to the legitimization of this conspiracy theory, lumping West’s far right-paranoia in with Oliver Stone’s far-left version.

Sadly, Conrad Black hardly counts. Sure, he’s a conservative, but he’s also a biographer of FDR who adores his subject. The fact that he’s defending Roosevelt doesn’t actually say much about the right.

On the other hand, Horowitz and Radosh aren’t exactly squishes on this stuff. If even they agree that West’s book is nonsense, then you can be pretty sure that it must be pretty well marinated in the worst kind of Glenn Beck-style nutballism. And yet, great swathes of the right wing have embraced it eagerly. This is part of a peculiar trend on the right over the past few years, in which conservatives are no longer content to argue that liberalism and the New Deal were merely misguided policies. That’s not enough. They’re now returning to Bircher-esque narratives that were abandoned long ago, in which the history of America since the 30s is just one long story of treachery, corruption, economic decline, and deliberate appeasement.

What’s the point of this game of one-upmanship? I’m not sure. But it’s sort of like the history of Hollywood blockbusters: spectacular battle scenes that seemed awesome just a few years ago are now old hat. New movies have to up the ante, which makes them more and more ridiculous every year. Likewise, conservatives seem to feel that they have to continually up the historical ante. You can barely get any attention these days by writing merely that liberals are trying to turn America into a socialist hellhole. That’s so 2009. Instead you have to argue that FDR was basically a Soviet mole. I’m not sure where it ends.