America’s $1.5 billion annual aid to Egypt is supposed to give us a bit of leverage in high places. But in the wake of yesterday’s massacre by the military—in direct opposition to repeated appeals from the U.S.—that leverage seems to be pretty much nonexistent. For that reason, Marc Lynch thinks it’s finally time to pull the 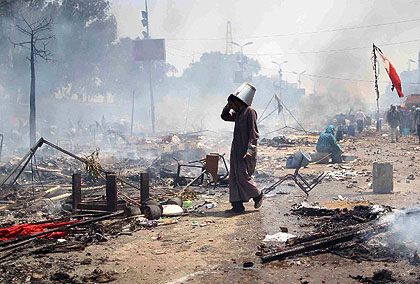 plug. Here’s the conclusion of an interview over at Wonkblog between Lynch and Brad Plumer:

BP: Is it possible to envision how the current crisis in Egypt might get resolved at this point?

ML: Honestly, I think things are going to get a lot worse, not better. The military’s rationale for moving in on the protester camps was that this was a festering wound, we just need to clear it out, do a surgical operation, end this, and move on. I think it’s clear that this is not what’s happening. The streets are incredibly polarized right now, and I think it’ll be extremely difficult to calm things down and get people back on the table.

For the past few years I’ve been one of the more optimistic people that Egypt would work things out. It just seems like there were enough state institutions, enough political consensus, enough of a robust civil society to keep things going.

Now I’m not so sure. I think what we’ve got now is a fairly transparent attempt by the military at Mubarak’s restoration, except without Mubarak. I’ve called it “High Mubarakism.”You’ve got a state of emergency, lots of anti-American propaganda. Sissi is a bit more popular, but I don’t think it will work. Mubarak failed for a reason.

BP: And at this point there’s not much the U.S. can do but watch?

ML: The problem is pretty much everyone is hostile to us at this point. The U.S. tried to take the stance of not supporting a particular group. But the more polarized Egypt got, the more everyone thought we were against them. All the liberals thought we were on the Brotherhood’s side. All the Brotherhood thought we were on the liberals side. So now you’ve got antipathy from every player in Egypt. And it’s being fed by a really malicious and malevolent anti-American propaganda campaign in the state media and in the pro-coup independent media. That just creates a really toxic atmosphere.

So America’s ability to do things like being evenhanded broker or try to mediate the conflict is just infinitely harder in that kind of situation.

I think it’s been fairly clear for over a month that the Egyptian military began planning all of this in the spring, possibly even earlier. It was rolled out very carefully, very strategically, and very ruthlessly. And while Mohamed Morsi may have been no saint, it probably didn’t matter. The military never had the slightest intention of allowing true civilian rule, whether from the Muslim Brotherhood or anyone else.

All the too-clever questions over the past few weeks from reporters trying to get Obama spokesmen to commit to calling the military action a coup was always silly. Everyone knew perfectly well why they didn’t, and everyone knew it made perfect sense for them to leave their options open as long as there was any hope of influencing the course of events. At this point, though, there pretty obviously isn’t, so there’s no longer much point to holding back. Lynch is right: you can’t just ignore the massacre of 500 people. It’s time to pull the plug.