David Corn has a new piece up today about Groundswell, a shiny new right-wing organization apparently set up to compete with groups like Grover Norquist’s Americans for Tax Reform, which Groundswell’s founders—including prominent loons like Frank Gaffney, Ginni Thomas, and Allen West—seem to consider ideologically unreliable these 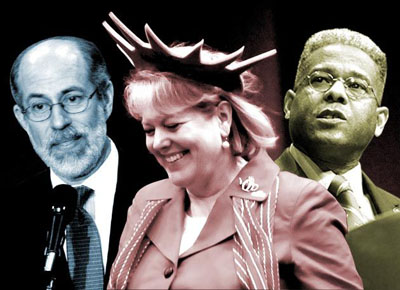 days. Their main goal, as near as I can tell, is to invent new talking points that can be spread far and wide by conservative media types who belong to Groundswell. For example:

At the March 27 meeting, Groundswell participants discussed one multipurpose theme they had been deploying for weeks to bash the president on a variety of fronts, including immigration reform and the sequester: Obama places “politics over public safety.” In a display of Groundswell’s message-syncing, members of the group repeatedly flogged this phrase in public. Frank Gaffney penned a Washington Times op-ed titled “Putting Politics Over Public Safety.” Tom Fitton headlined a Judicial Watch weekly update “Politics over Public Safety: More Illegal Alien Criminals Released by Obama Administration.” Peter List, editor of LaborUnionReport.com, authored a RedState.com post called “Obama’s Machiavellian Sequestration Pain Game: Putting Politics Over Pubic Safety.” Matthew Boyle used the phrase in an immigration-related article for Breitbart. And Dan Bongino promoted Boyle’s story on Twitter by tweeting, “Politics over public safety?” In a message to Groundswellers, Ginni Thomas awarded “brownie points” to Fitton, Gaffney, and other members for promoting the “politics over public safety” riff.

Nice work! But at the risk of being a little bit of a dick, here’s my favorite part of the story:

Notes from a February 28 Groundswell gathering reflected both their collective sense of pessimism and desire for aggressive tactics: “We are failing the propaganda battle with minorities. Terms like “‘GOP,’ ‘Tea Party,’ ‘Conservative’ communicate ‘racism.'” The Groundswellers proposed an alternative: “Fredrick Douglas Republican,” a phrase, the memo noted, that “changes minds.”

Note to Groundswellers: You might change a few more minds in the black community if you knew enough black history to spell Frederick Douglass’ name correctly. Just sayin’.

Truthfully, these guys sound more like Keystone Kops than a serious threat to the political balance of Washington, DC. Still, it’s remarkable that even after the rise and triumph of the tea party movement within the Republican Party, there continues to be a sizable and influential bunch of wingers who remain convinced that the GOP is right on the edge of acquiescing in the liberal destruction of the American way of life. Read the whole thing.