What was Edward Snowden’s job when he worked for Booz Hamilton as a contractor to the NSA? Most of us have been under the impression that he was a systems administrator or network administrator. The initial Guardian story described him as a “former technical assistant for the CIA and current employee of the defense contractor Booz Allen Hamilton.” The same story mentioned him talking about things that were comprehensible only to his “fellow communication specialists.” The Washington Post described him as a “tech specialist” and quoted several sources who were baffled that someone with his background had access to all the documents he had released.

But in the video interview that introduced him to the world, he actually said that he was an “infrastructure analyst” who had previously worked for the CIA as a systems administrator 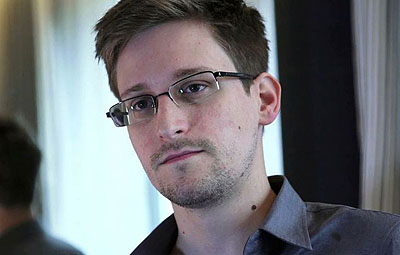 and telecommunications systems officer. Today, the New York Times tells us that this job title is more revealing than it seems:

It is a title that officials have carefully avoided mentioning, perhaps for fear of inviting questions about the agency’s aggressive tactics: an infrastructure analyst at the N.S.A., like a burglar casing an apartment building, looks for new ways to break into Internet and telephone traffic around the world.

….A secret presidential directive on cyberactivities unveiled by Mr. Snowden—discussing the primary new task of the N.S.A. and its military counterpart, Cyber Command—makes clear that when the agency’s technicians probe for vulnerabilities to collect intelligence, they also study foreign communications and computer systems to identify potential targets for a future cyberwar.

Infrastructure analysts like Mr. Snowden, in other words, are not just looking for electronic back doors into Chinese computers or Iranian mobile networks to steal secrets. They have a new double purpose: building a target list in case American leaders in a future conflict want to wipe out the computers’ hard drives or shut down the phone system.

Stuart Staniford has suspected from the start that this might have been Snowden’s role. He wrote this three weeks ago:

I speculate that it is going to turn out that Snowden was an electronic intruder on the government payroll. Profiles describe him as secretive, fascinated with computers, and with knowledge of things like Tor (a peer-to-peer network for maintaining anonymity for computer communications). His last job was working at an NSA network threat detection center, suggesting knowledge of computer security. He had previously worked for the CIA, including overseas, suggesting a cyber-offense role…He may have had a lot of access—it’s very common for people working in computer threat detection to have access to platforms that see everything going on in the networks in order to look for potential threats.

I asked Glenn Greenwald via Twitter if Snowden had described his job in more detail during their interviews. He replied: “Sort of—he’s been depicted as far more primitive and lower-level than he really was.” I’m not sure precisely what that means, but it was all I got.

The fuzziness surrounding this is frustrating. I’d certainly like to know more about what Snowden did for the NSA. Did he work on network security? Was he a threat analyst of some kind? Did he actively search out vulnerabilities in other networks that NSA could exploit? Did he do this only at Booz Hamilton, or did he have basically the same job previously when he worked directly for the NSA? Exactly how much does he know about the NSA programs he’s been revealing to the world?

This whole affair gives me an odd vibe. For reasons I can’t figure out, I feel like everyone is holding back information. Obviously the government is, but it sure seems as if the journalists reporting this story have also declined to tell us everything they know. Maybe there’s good reason for this. But I wish I knew what it was.

And on a related note, I’d still like to know what’s on those other 37 PRISM slides. Or, at the very least, I’d like to know why I can’t know. The Washington Post published four of them a few days ago, and they revealed some pretty interesting information, including the number of targets of the PRISM program and the fact that PRISM allows a certain amount of real-time surveillance. I certainly don’t see anything on those slides that couldn’t have been released weeks ago. What’s more, Snowden apparently thought the entire set of slides should be revealed to the world. I’d like to know what changed his mind.