Bob Somerby reminds me of something today that I’m embarrassed to have forgotten when I wrote about the latest NAEP test scores on Friday. I mentioned that scores among 9- and 13-year olds have increased steadily over the past four decades, but that scores among 17-year-olds haven’t. That’s a problem: higher test scores hardly matter if they wash out before kids leave high school.

Now, one caveat here is that fewer kids are dropping out of high school than in the past. That’s a good thing, but by keeping marginal students in school it’s also likely to reduce overall test scores. I’m not aware of anyone who’s tried to estimate the impact that’s had on test scores, but it’s almost certainly nontrivial.

But what’s really important—and what I forgot to mention—is that you have to disaggregate test scores to really understand what’s going on. Let me give you an example from a different area: English literacy. Suppose you have 100 residents of the country, 90 of them native and 10 of them recent immigrants. Among the natives, English literacy runs at 90 percent. Among the immigrants it’s 70 percent. This means that a total of 88 residents (81 + 7) are literate in English.

Now suppose the composition changes: we have 80 natives and 20 recent immigrants. And both groups are doing well! Native literacy has improved to 91 percent and immigrant literacy 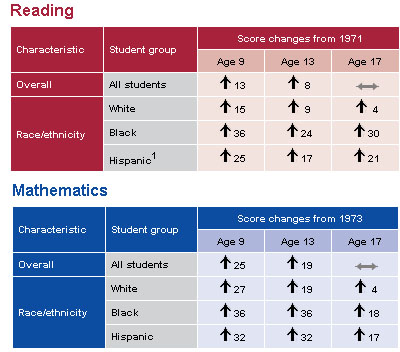 has improved to 75 percent. That sounds great, doesn’t it? But what if you lump everyone together? Then it turns out that 88 residents are literate (73 + 15). It looks like there’s been no progress at all. Literacy is up among all groups, but the rising share of immigrants has pushed down the average.

The situation is similar with school test scores, where blacks and Hispanics have historically scored worse than whites. Over the last four decades, scores have gone up among all three groups (as you can see in the table on the right), but the rising share of blacks and Hispanics has pushed down the average when you lump everyone together.

So the reality is that although there’s still a dropoff between age 13 and age 17, once you disaggregate the scores it turns out that even 17-year-olds are doing better than in the past. Whites are doing a little better, and blacks and Hispanics are doing way, way better. There remains plenty of ground to be made up (whites still outscore blacks and Hispanics by about 20 points or so, which is roughly equivalent to two grade levels), but there’s no question that there’s been progress. You can read more here for both good news and bad about who’s doing well and which time periods have shown the most progress.

For today, though, the moral of the story is: Always disaggregate! It’s a big word, but a simple concept. Without it, you’ll never understand the big picture.