A few days ago, after reading a dispatch in the New York Times about the suspiciously sudden recovery of public services following the military coup in Egypt, I wondered 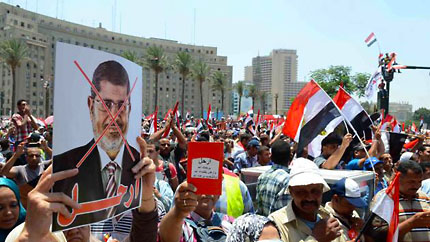 if the army had been planning its takeover from the very start. Today, the Wall Street Journal says, yeah, pretty much:

In the months before the military ousted President Mohammed Morsi, Egypt’s top generals met regularly with opposition leaders, often at the Navy Officers’ Club nestled on the Nile. The message: If the opposition could put enough protesters in the streets, the military would step in—and forcibly remove the president.

“It was a simple question the opposition put to the military,” said Ahmed Samih, who is close to several opposition attendees. “Will you be with us again?” The military said it would. Others familiar with the meetings described them similarly. By June 30, millions of Egyptians took to the streets, calling for Mr. Morsi to go. Three days later, the military unseated him.

….The meeting of minds between Mubarak-era powers and the secular opposition has coincided with a resurgence of bare-knuckle political tactics resembling Mubarak-era violence. In the days before Mr. Morsi’s ouster, for instance, a wave of violence against Muslim Brotherhood offices bore similarities to violence on behalf of the Mubarak regime during previous elections in the Mubarak era.

It is difficult to know the attackers’ motives with certainty. Within Egypt they are viewed by many who witnessed the violence as efforts by Mubarak-era power brokers to push Mr. Morsi out using methods that once sustained Mubarak. With Mr. Morsi out, Mubarak-era figures and institutions are gaining influence. The military chose a Mubarak-era judge as interim president. Other Mubarak-era judges are set to head efforts to draft a new constitution.

As near as I can tell, this has become practically conventional wisdom within the past week. The military, representing the “deep state,” negotiated a deal with Morsi’s secular opponents that involved all three groups. The deep state’s job was to keep public services in shambles as a way of stoking public anger. The secularists provided the populist cover and the shock troops for widespread protests. The military provided the muscle to oust Morsi and take over the government. After the deed was done, public services were quickly restored, the secularists were given a share of political power, and the military regained much of its old influence and independence. All nice and neat.

There’s more detail in the Journal piece. It’s well worth a read.