The number of homicides on record in New York City has dropped significantly during the first half of the year — to 154 from 202 in the same period last year — surprising even police officials who have long been accustomed to trumpeting declining crime rates in the city.

….Police Commissioner Raymond W. Kelly attributed much of the drop to a new antigang strategy meant to suppress retaliatory violence among neighborhood gangs. Police officials also credited their efforts at identifying and 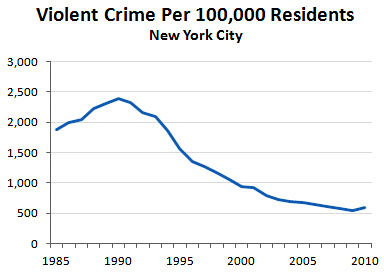 Now, I now what you’re thinking: it’s not the antigang program, it’s the lead! And I like the fact that you’re thinking that way. But no: lead is probably responsible for the long-term drop in violent crime in New York City, but it’s not the kind of thing that produces a sharp drop in a single year. That’s either a statistical blip or else the result of something else. The antigang program is one possibility.

At the same time, the background of falling crime is certainly what makes a sharp drop from new police programs possible in the first place. If crime were still at 1990 levels, Kelly’s antigang program would just be a drop in the ocean. It wouldn’t have even a chance of succeeding. So in that sense, lead abatement almost certainly played a role in the 2013 drop in the murder rate. The lower overall rate of violent behavior makes the antigang program more effective because (a) there are now more murders that can be stopped with just a small nudge, and (b) it frees up police resources to work on the program.

Not that New York residents are likely to hear about this. It’s a funny thing: when my lead piece for Mother Jones hit the newsstands, we offered to write an op-ed length version of the story for the New York Times. They turned us down instantly. Ditto for the LA Times. These are the two biggest cities in America; the cities that suffered the highest violent crime rates in the early 90s; the cities with the steepest decline in crime rates since then; and almost certainly the two biggest beneficiaries of the decline in lead exposure among young children. But although both newspapers relentlessly promote the latest stories from their mayors and police chiefs about the decline in crime, they apparently have no interest whatsoever in the lead hypothesis. It’s a little hard to fathom.