Here’s Alana Semuels of the LA Times on the state of work today:

The envelope factory where Lisa Weber works is hot and noisy. A fan she brought from home helps her keep cool as she maneuvers around whirring equipment to make her quota: 750 envelopes an hour, up from 500 a few years ago. There’s no resting: Between the video cameras and the constant threat of layoffs, Weber knows she must always be on her toes.

….In 2010, National Envelope was acquired by the private equity firm Gores Group of Los Angeles, which drew on the standard playbook for such takeovers: Close inefficient plants, cut staffing and demand more from remaining employees. The company has fewer than 2,500 employees now, half the number it had in 2001.

….“Generally, the business had been run the same way since its inception,” said Tim Meyer, a Gores Group executive. “It became clear that as the market began to soften, what was in place was not a sustainable business 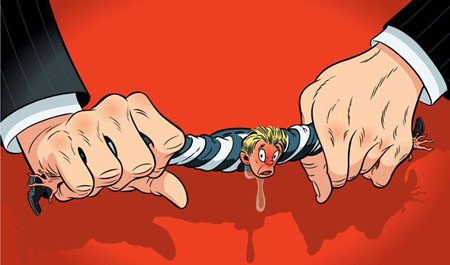 model….Sometimes you have to make dramatic changes to save the jobs that you can,” he said.

Maybe so. After all, National Envelope had filed for bankruptcy before it was acquired. If Gores Group ends up making only a modest profit from its acquisition, then maybe we’ll just shrug our collective shoulders and write off National Envelope as yet another victim of globalization.

But on the more likely chance that Gores Group is in this in order to make not a modest profit, but a killing, it basically represents yet another example of the redistribution of wealth upward in the United States: Cut staff, slash benefits, work everyone harder, and generate huge returns for the rich investors who fund Gores Group.

And here’s part 2 of this series of stories about the state of work today:

Employers are using technology to read emails and monitor keystrokes, measure which employees spend the most time on social networking websites and track their movements inside and outside the office. They can see who works fastest and who talks the most on the phone. They can monitor how much time people spend talking to co-workers — and how much time they spend in the bathroom.

….For companies, the reward is financial. Unified Grocers, which supplies food to grocery chains including Vons and Gelson’s, trimmed its payroll 25% from 2002 to 2012 — but managed to increase sales 36%, according to regulatory filings.

….Companies learned a lesson during the recession, [Rod Van Bebber, senior vice president of operations] said: If there are fewer people and the same amount of work, employees will find a way to get it done. If everyone does a little more, that can mean “one less employee you have to hire,” Van Bebber said. “That’s one less health and welfare package.”

Unfortunately, van Bebber is right: a lot of companies did learn this lesson during the recession. “We’re just like human machines,” forklift driver Phil Richards said about the change in working conditions over the past few years.

Welcome back to the 19th century, my friends. For more, check out “All Work and No Pay: The Great Speedup,” from our July 2011 issue.