Republicans have been demanding action on the deficit practically from the minute Barack Obama was inaugurated. Over the past couple of years they’ve finally gotten it. Spending has been slashed, the federal deficit is declining steeply, and the 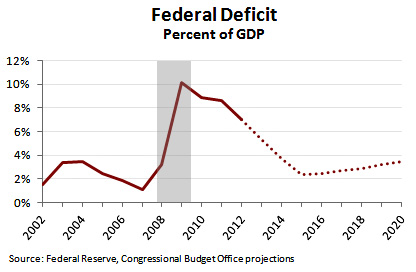 10-year deficit projection has been reduced by $4 trillion. So now, having gotten so much of what they wanted, does this mean Republicans are ready to soften up a bit on their deficit mania? You jest, of course. Jon Cohn rounds up the latest news:

Paul Ryan is about to unveil a new proposal for how the government should spend its money. According to multiple media accounts, it will look a lot like the budget plans he’s produced before, the ones that famously called for radically downsizing the government. The main difference? The cuts in this proposal will be even bigger.

….With this new budget, Ryan doesn’t appear to be offering new concessions. On the contrary, it looks like he’s making new demands. And plenty of Republicans seem to think this is the right thing to do. That’s perfectly within their rights: They believe it’s best for the country. But it’s a reminder that Republicans aren’t sincerely interested in compromise for its own sake—or in taking more moderate positions on the issues. Yes, the voters delivered a pretty devastating verdict about this agenda just a few months ago. But if the number two guy on the ticket doesn’t seem to care, why should the rest of them?

This comes as no surprise. When Ruth Marcus asked Ryan a few days ago if Republicans were planning to give us all a breather and avoid a showdown over the upcoming debt ceiling cliffhanger in April, he was unmoved: “Not this time,” he said, “We’re not leaving this session of Congress until we have a down payment on the problem.”

So apparently conservatives are right: appeasing fanatics doesn’t work. It just makes them determined to demand even more. Perhaps it’s time to listen to them and adopt a new strategy.