John Dickerson argues that if President Obama wants to make a grand bargain with Republicans, he needs to stop saying nasty things about them. I don’t happen to 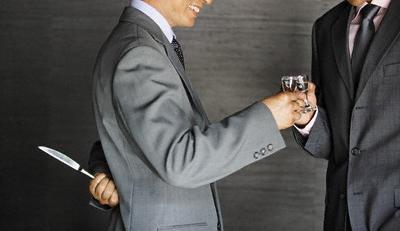 agree about that,1 but it’s a reasonable enough suggestion. It’s easier to do a deal if you’re not constantly trash talking your opposition.

But this I don’t get:

The premise of the president’s recent outreach to Republicans is that he might be able to build connections that would lead to a grand budget bargain. This relationship relies on trust. Republicans must trust that if they take a political risk to support changes in the tax code that would bring in revenue for deficit reduction—which will hurt them with their supporters—the president won’t undermine them further with their voters by making them look like chumps.

….Speaker Tip O’Neill and President Ronald Reagan were often pretty mean in public….But the two men could work together because they had a certain level of trust. In today’s world, this is how a Republican senator can say glowing things about New York Sen. Chuck Schumer. Schumer may regularly demagogue Republicans, but in a deal his word is solid. He can be trusted.

Wait a second. Dickerson is saying it’s OK for Schumer to be nasty because, apparently, being nasty doesn’t reduce trust. What reduces trust is going back on your word, and Schumer doesn’t do that.

Presumably the same is true of Obama. So what makes Dickerson think Obama has broken his word? His entire case is built on the claim that when Obama met with Senate GOP leaders a couple of weeks ago, he said he’d reduce his attacks on Republicans. Then, a couple of days later, he accused them of wanting to “gut Medicare or gut Social Security or gut Medicaid.” That’s an attack! It proves he can’t be trusted to keep his word.

This is pretty thin gruel. Here’s what Obama actually said:

But ultimately, it may be that the differences are just too wide. It may be that ideologically, if their position is, “We can’t do any revenue,” or, “We can only do revenue if we gut Medicare or gut Social Security or gut Medicaid,” if that’s the position, then we’re probably not going to be able to get a deal.

That’s not an attack. Obama wasn’t accusing Republicans of wanting to gut entitlements, he was just saying that if that’s where they end up, then a deal probably won’t get done. I don’t think that even John Boehner could work up any fake outrage over that.

Look: Republicans are going to pretend to be offended at everything Obama says. That way, if there’s no deal, they’ve got a ready made excuse. But nobody should take this faux offense at face value. It’s all part of the game.

Trust, on the other hand, is lost when people don’t keep their word. And maybe the Obama administration hasn’t done that. But if so, I’d sure like to see the evidence. As near as I can tell, both sides have been relatively trustworthy in the usual sense of the word. They just disagree really strongly, and that’s prevented them from making a deal. There’s no need to look for anything more complicated than that.

1Why not? Two reasons. First, I think political deals are mostly the result of horsetrading, outside pressure, and ideological positioning. Rhetoric doesn’t play much of a role. Second, being nasty is part of making Obama’s case with the public, and if he deploys his attacks effectively that puts pressure on Republicans. I suspect this outweighs the downsides of being nasty.