All morning I’ve been trying to decide whether I should care about the release of Simpson-Bowles 2.0. As you can guess from its name, this is yet another plan for deficit reduction from the folks who failed to get bipartisan agreement for their first plan.

So in one sense: who cares? Deficit reduction plans are a dime a dozen. There’s really nothing special about releasing a fact sheet with a bunch of numbers that add up to some other number. Anyone can do that.

On the other hand: for some reason, Simpson and Bowles get more media attention for their deficit reduction plans than most other people. So I guess we have to take it seriously whether we want to or not. 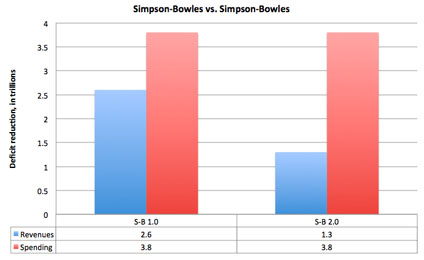 farm subsidies and highway funding. But without details, it’s impossible to say anything further.

Except for one wee thing. Ezra Klein, bless his heart, managed to figure out the ratio of spending cuts to tax increases (it’s buried on page 3, in the phrase “and another quarter from tax reform”) and then compare it to Simpson-Bowles 1.0. And guess what? Despite their brave talk about both sides needing to “put their sacred cows on the table,” they’ve apparently decided that conservatives should put a whole lot fewer of their sacred cows on the table than they suggested in their first plan. The chart on the right tells the story. In SB 1.0, deficit reduction was moderately evenly divided between spending cuts and tax increases. In SB 2.0, they’ve suddenly decided it should be 75 percent spending cuts. That’s despite the fact that spending cuts have already been 75 percent of the deficit reduction we’ve done so far.

Why? Beats me. I guess they figure that conservative sacred cows are a little more sacred than liberal ones. Or something. But even if you take deficit reduction seriously in the first place, this sure makes it hard to take Simpson-Bowles 2.0 seriously as a plan.

UPDATE: Ezra made a correction to the chart, so I’ve updated the post to reflect that. The new chart shows the spending cuts in SB 1.0 more accurately. When you account for interest savings, they amount to $3.8 trillion, not $2.9 trillion.