Apparently President Obama plans to use part of tomorrow’s State of the Union address to talk about new investments in infrastructure: roads, bridges, electrical grid upgrades, etc. Neil Irwin correctly points out that this would make a ton of sense, since lots of construction workers are unemployed and interest rates are essentially negative, but 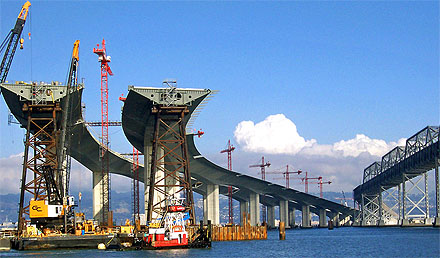 also correctly points out that Republicans don’t care about any of that. Spending is bad, and that’s that. And yet, Irwin is optimistic!

“Anything that is akin to the stimulus bill is not going to be acceptable to the American people,” House Majority Leader Eric Cantor said in September 2011, after Obama proposed a series of job-creation measures centered around new infrastructure.

But a few things have changed since then. First, Republicans have seen electoral damage by their image as an obstruction-at-all-cost party, losing the White House and seats in both houses of Congress in the 2012 elections….Second, the president has been re-elected, so there is no longer the odd dynamic where bipartisan dealmaking could make Obama look more statesmanlike and help his re-election chances.

Much of the Republican opposition to infrastructure spending has been rooted in a conviction that all government spending is a boondoggle, taxing hard-working Americans to give benefits to a favored few, and exceeding any reasonable cost estimate in the process. That’s always a risk with new spending on infrastructure: that instead of the Hoover Dam and the interstate highway system, you end up with the Bridge to Nowhere and the Big Dig.

In that sense, this is a great test of whether divided democracy can work, and whether Republicans can come to the table to govern. One can easily imagine a deal: Democrats get their new infrastructure spending, and Republicans insist on a structure that requires private sector lenders to be co-investors in any projects, deploying money based on its potential return rather than where the political winds are tilting.

In other words, the two sides could negotiate in good faith and, in the process, get a better outcome for the U.S. economy than either party could operating on its own. Now that would be something to see.

This is odd. I’m trying to figure out if there’s any reason, no matter how slight, to think that Republicans have any interest at all in a deal like this. Obviously I’m blinkered by my own partisan biases, but I sure can’t think of any. Am I missing anything here?