Take a look at this useful set of pictures from the BLS on the not-very-healthful status of defined benefit (DB) private pension plans in America today (DB pensions provide guaranteed, periodic payments in retirement). A quick glance led me to believe that these data points should be a front-and-center defense against those who would cut deeply into Social Security and Medicare benefits.

In sum, as DB private pensions weaken, we need to strengthen public ones. The loss of DB private pensions—and their partial replacement by financial-market-dependent defined contribution plans—represents a shift in the locus of risk of retirement insecurity from employers to workers.

Aside from my obduracy on the issue of minting a $1 trillion platinum coin, probably the biggest pushback I get from fellow liberals on any subject is about my willingness to modestly cut the future growth of Social Security as part of a bigger deal to improve the long-term solvency of the system. One of the most compelling arguments my critics have is the one above: Social Security isn’t especially generous as it is, and with private pensions on the decline it’s more important than ever to keep benefit growth at least at current levels. 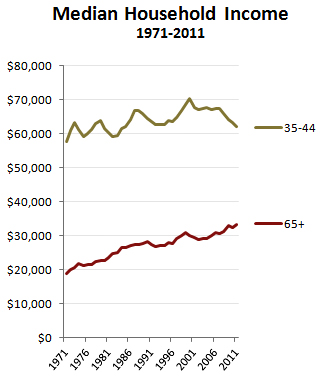 So why haven’t I changed my tune on this? Well, Jared excerpts a bunch of charts showing how defined-benefit pensions have declined over the years, but there’s another chart that he doesn’t show. It’s the one on the right, and it shows median household income for both middle-aged workers and those over age 65. (Adjusted for inflation, of course.) Despite the decline of DB pensions, the median income of retirees has grown 75 percent over the past four decades. The median income of middle-aged workers has grown a bit less than 8 percent.

So am I thrilled about increasing taxes on middle-class workers in order to prevent benefits for retirees from growing even the slightest bit more slowly? Not really, because relatively speaking, retirees are the ones doing better in recent years. What’s more, these numbers don’t include the value of health benefits. Since retirees are 100% covered by Medicare, the relative growth rates would probably be even more dramatically in their favor if you counted that.

Now, there are a bunch of things you can say about this. Perhaps we should tax the rich instead of the middle class to keep Social Security solvent? I’m in favor of taxing the rich at higher rates, but the truth is that there’s a limit to this. We’re going to need to raise taxes to keep Medicare solvent too, and we can’t get it all solely from the rich. At some point we’re going to have to raise taxes on the middle class too.

Alternatively, you can argue that the real problem here is that middle-class incomes have stagnated so badly. So instead of moderating the growth of retiree income, we should stimulate the growth of worker income. I couldn’t agree more. Unfortunately, I’m not sure how to do that, and in the meantime we still have to consider whether or not we want to tax the middle class at higher rates for the benefit of the elderly.

Finally, you might criticize me for showing only median income. What about the poorest seniors, who rely solely on Social Security? There I agree. Any change to Social Security should have no impact on the poorest retirees. In fact, most of the reforms I like end up cutting benefits more heavily on the better-off in order to increase benefits a bit at the low end.

In the end, we’re going to have to increase taxes to fund pension and healthcare benefits for an aging society. If I have my way, the bulk of those taxes will come from the rich, who have seen their incomes skyrocket over the past few decades. But there’s not much question that at least some of the taxes will have to come from middle-class workers. Given how poorly they’ve done over the past 40 years, I think those taxes should be kept to a minimum. And like it or not, that means tightening up a bit on the future growth of retiree benefits.

So if you’ve ever wondered what motivates my persistence on this issue, this is it. There’s just a limit to my appetite for increasing taxes on the middle class in order to fund benefit increases for retirees.