Last year, Republicans managed to sucker Bob Woodward into believing that the reason they had gotten frustrated with OMB director Jack Lew during the debt ceiling negotiations was that the guy just wasn’t willing to deal. “Jack Lew said no 999,000 times out of a million,” Boehner told Woodward. Then he corrected himself. “999,999. It was unbelievable. 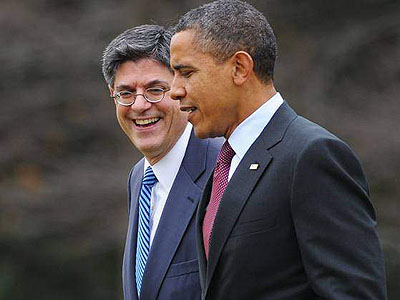 At one point I told the president, keep him out of here. I don’t need somebody who just knows how to say no.”

This self-serving fairy tale has entered Washington DC lore, but it’s so at odds with Lew’s previous reputation that it hardly bears scrutiny. Matt Yglesias knocks it down:

But it emerged over the course of the negotiations that John Boehner and other Republicans kept trying to kick Lew out of the room to make a deal. That’s because what Boehner wanted to do was make a deal in which spending cuts would be balanced by flim-flam, and Lew kept saying that the flim-flam didn’t work mathematically. To put a balanced package together, Lew insisted that you needed to have real revenue-increasing tax hikes not just “tax reform” and handwaving. This kept spoiling the party, so Boehner wanted to make deals with Daley—with the political fixer rather than the budget guy. But ultimately you couldn’t get a deal done, because you can’t just smuggle a deal past the OMB.

Pretty much all the evidence suggests that this is exactly what happened. The sticking point in the debt ceiling talks was never Jack Lew, nor was it Barack Obama’s supposed aloofness or poor negotiating skills. It was taxes. Full stop. In the end, the deal breaker was twofold: (a) Boehner wanted nothing more than a smoke-and-mirrors tax increase based on dynamic scoring pixie dust, and (b) he balked when Obama tried to increase his tax ask after the Gang of Six announced a bipartisan deficit plan that included $1.2 trillion in increased taxes.

Deficit negotiations between Obama and Boehner have always foundered on taxes, one way or another. The tea party zealots in the House simply won’t support tax increases of even a dime, and Boehner can’t make them. It’s never been clear to me whether Boehner sincerely wants to make deals and just can’t get his caucus to agree, or if he’s always known that taxes are off the table but is pretty good at spinning reporters into believing that he really tried his best.

In any case, keep this mind when you read about the inevitable Republican kvetching over Lew’s nomination as treasury secretary. It’s mostly just invented nonsense. They don’t like being embarrassed by a guy who keeps trying to drag them back into reality when the subject is budget numbers. That’s what this is really about.