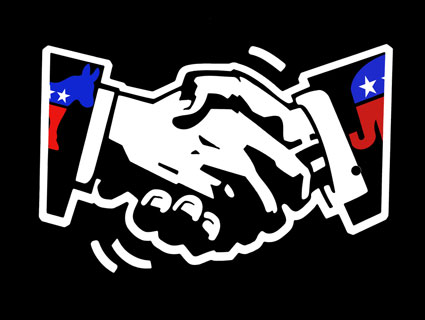 It’s over. Sort of. The Senate voted 89-8 to prevent middle-class taxes from rising while allowing rates to increase for taxpayers with incomes over $450,000. Democrats caved in on the estate tax, so the elderly super-wealthy can breathe easy on that front. Capital gains taxes go back up to 20 percent for high earners, and Democrats and Republicans split the difference on dividend taxation, raising it to 20 percent too, rather than the 39.6 percent Obama wanted. The working class got an extension of the stimulus tax cuts, but lost out on an extension of the payroll tax holiday. The deal also includes a bunch of other miscellaneous provisions (Suzy Khimm has the details here), and the end result is a revenue increase of about $600 billion over ten years.

In bonus news, the milk cliff was also averted. At the last minute, the Senate added a nine-month extension of the current farm bill to the legislation. This means we won’t be reverting to the 1949 law, which would have doubled milk prices across the country. Lactophiles can now breathe as easily as millionaires in hospices.

But it’s not over til it’s over, and the fiscal cliff is far from over. First, the House still has to vote on the deal. They’ll probably approve it, though. [Late night update: They did.] More importantly, negotiators punted over the debt ceiling and the sequestration cuts. That’s the $1.2 trillion in automatic spending cuts that emerged from the 2011 debt deiling debacle, split evenly between domestic programs and defense programs. Congress now has two months to hammer out a deal on that front, and Obama held a press conference yesterday warning Republicans that he wouldn’t accept a deal that was all spending cuts and no revenue increases. If this sounds like the exact same thing they’ve been fighting over for the past year, give yourself an A.

So as soon as Part 1 of the fiscal cliff deal is safely signed and in the history books, we’re going to have the same, dreary argument all over again. Call it Fiscal Cliff 2: The Dogfight in the District Continues. Republicans will once again try to use the debt limit to hold the country hostage, hoping that

Obama will—once again!—play the role of the responsible adult in the room and cave in to their demands because he understands that America can’t default on its debts. Obama, for his part, says he’s tired of being typecast, and he’s demanding script changes. Check back on February 28 to see how it all turns out.

So let’s tote up the winners and losers. On the deal itself, despite my misgivings yesterday, I guess I’d score it a short-term win for Obama. He had to give up a few things he wanted, notably the $250,000 income cutoff that he campaigned on, but he did wring a tax increase out of congressional Republicans. In the longer term, I’d score it a win for the GOP. Their backs were against a wall, since the Bush tax cuts were all going to expire anyway on January 1, and they managed to do two things. First, they kept the size of the deal limited. Second, they showed that Obama, as usual, isn’t serious when he lays down a line in the sand. No matter how firmly he insists on something, he’s always willing to deal. This is going to make Part 2 of the fiscal cliff negotiations very, very dangerous.

Beyond partisan politics, the American public has been ill served by all this. Common sense dictates the kind of deal we needed: lower taxes and more stimulus now, followed by a serious attempt at deficit reduction in the medium-term future. We got a bit of the former, but the truth is that extending the middle-class tax cuts was always the least important part of what we needed to insure that our economy continues to recover. What we really needed was an extension of the payroll tax holiday, a complete end to the sequestration cuts, and more infrastructure spending. Those are the things that would have given us the biggest bang for the buck in the near term, and we got none of that.

In the long term, we also got nothing. No long-term revenue increases and no long-term entitlement reform. David Brooks has it about right: “The country either doesn’t know or doesn’t care about the burdens we are placing on our children. No coalition of leaders has successfully confronted the voters, and made them heedful of the ruin they are bringing upon the nation.” I’m not quite the deficit Chicken Little that Brooks is, since a lot of our current deficit problems will go away naturally when the economy recovers. Still, not all of them will. We do need some common-sense reforms, and we also need to accept that, like it or not, tax revenues are going to have to increase as our nation ages. There’s simply no getting around that.

But Republicans are no closer to accepting reality on that front than they’ve ever been. Our current trench warfare will continue for the foreseeable future, and it’s unlikely that anyone will really come out a winner.