President Obama was much more direct about the impact of climate change than usual in his inaugural address yesterday:

We will respond to the threat of climate change, knowing that the failure to do so would betray our children and future generations. Some may still deny the overwhelming judgment of science, but none can avoid the devastating impact of raging fires, and crippling drought, and more powerful storms. The path towards sustainable energy sources will be long and sometimes difficult. But American cannot resist this transition. We must lead it.

Does this mean we’re actually going to do something serious? We’d better. Thomas Lovejoy wrote yesterday in the New York Times that even a rise of two degrees C, the limit most often mooted, would be catastrophic:

Two degrees is actually too much for ecosystems….A 2-degree world will be one without coral reefs….At current global warming of 0.8-0.9 degrees, the fingerprints of climate change can be seen virtually everywhere in nature. The coniferous forests of western North America are currently experiencing massive tree mortality because climate change has tipped the balance in favor of native bark beetles. The Amazon seems to be edging close to dieback in the southern and southeastern portions of the great forest.

At essentially double that current temperature increase, there undoubtedly will be massive extinctions and widespread ecosystem collapse. The difficulty of trying to buffer and manage change will increase exponentially with only small increments of warming. In addition, the last time the planet was 2 degrees 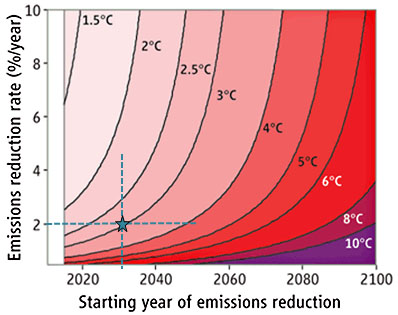 More than a 2-degree increase should be unimaginable. Yet to stop at 2 degrees, global emissions have to peak in 2016.

2016. We’re pretty obviously not on track to make that happen, but further inaction would be disastrous. Stuart Staniford reproduced the chart on the right today, which shows the likely amount of warming based on when we start cutting carbon emissions and how fast we cut them. I’ve added the dashed blue lines, which show where we’ll be if carbon emissions peak in 2030 and then decline steadily at 2 percent per year. Answer: 3 degrees C.

That would be catastrophic, leading to sea level rises of 5-10 feet this century, massive die-offs, and the virtual depopulation of significant areas of the planet. And yet, at current rates, 2030 looks to be about the best we can hope for. The political will for more just doesn’t exist right now.

If President Obama achieves nothing in his next term except to change that, it would be, by far, the most significant thing he does. We’re not just running out of time. We’ve already run out of time. Hurricane Sandy was only a tiny taste of what our grandchildren are in for if we keep twiddling our thumbs for another couple of decades just because acknowledging climate change is inconvenient for a particular political ideology.