Does rising income inequality place a drag on economic growth? Joe Stiglitz says yes, and the basic argument is pretty simple: the poor and middle class tend to spend nearly 100% of their income while the rich spend much less of theirs. To see what effect this has, suppose you have two people in an economy with total income of $100. Now take a look at two different scenarios:

This sounds pretty plausible, doesn’t it? Higher inequality should generate less consumption, which in turn produces a weaker economy. Unfortunately, the data says something else. “I 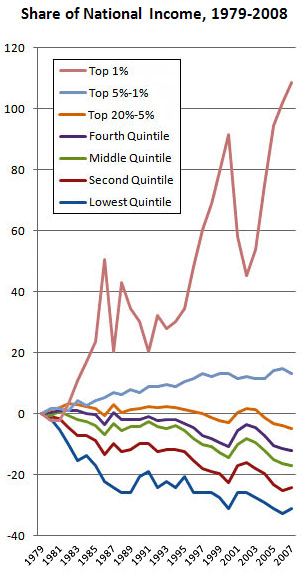 wish I could sign on to this thesis,” says Paul Krugman, “and I’d be politically very comfortable if I could. But I can’t see how this works.”

Me neither. I spent a couple of months trying to write a magazine piece based on this thesis, and I finally gave up. By the time I was done, I just didn’t believe it. So I gave up and spiked the idea.

Still, there are other ways that income inequality can hurt the economy. Krugman, for example, buys the idea that high inequality fosters financial crises, and when I was done with my research I found that an intriguing hypothesis too. There’s a pretty compelling argument to be made that rising inequality simultaneously puts pressure on the middle class to borrow more (in order to maintain steadily improving lifestyles even with stagnant incomes) and on the rich to lend more (they have to do something with all that extra money they’re hauling in, after all). So the rich lend money to the non-rich, but as the debt loads of the non-rich grow they become less and less able to afford more borrowing. That produces (a) government policies that help to sustain the credit bubble and (b) ever more baroque financial instruments to convince the rich that their lending is still safe. Eventually, however, it all collapses.

My conjecture would be that high levels of inequality greatly complicate the political economy of expansionary policy….To the extent that you have a lot of inequality, your politics is naturally going to be more focused on questions of distribution than expansion. I think you saw that in liberal hostility to even temporary expansion of the Bush tax cuts and even more clearly in things like the GOP turn against Making Work Pay and the payroll tax cut.

Maybe! The poor want to stick it to the rich even if that hurts economic recovery, and the rich want to stick it to the poor because….something. The motivation there is less clear, actually. Empirically, though, it sure seems to be the case. There’s not much question that in America, anyway, the party of the rich is distinctly non-thrilled with tax cuts that primarily benefit the poor and the middle class.

In the end, I find all of this compelling but still pretty speculative. In the meantime, there are plenty of reasons to oppose growing income inequality even if it doesn’t directly hurt economic growth. I might change my mind later, but for now I think those reasons will have to do.