In my article about lead and crime, I didn’t spend any time talking about the history of lead as a gasoline additive. Why? Because the piece was already 6,000 words long and I figured that adding to its length with a history lesson would detract from the primary point I wanted to make.

Nonetheless, the history of tetraethyl lead (TEL) has lessons to teach us. Its origins as a gasoline additive began in the 1920s, when it was perfected by GM as an anti-knock compound for high-compression engines. But GM—controlled at the time by DuPont— knew perfectly well that there was already an effective anti-knock additive available: ethanol. Motor fuel made up of about 80% 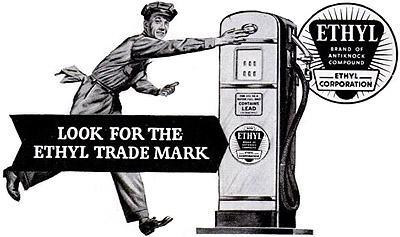 gasoline and 20% ethanol worked beautifully. In “The Secret History of Lead,” published in 2000 in The Nation, Jamie Lincoln Kitman explains what happened next:

From the corporation’s perspective, however, the problems with ethyl alcohol were ultimately insurmountable and rather basic. GM couldn’t dictate an infrastructure that could supply ethanol in the volumes that might be required. Equally troubling, any idiot with a still could make it at home, and in those days, many did. And ethanol, unlike TEL, couldn’t be patented; it offered no profits for GM. Moreover, the oil companies hated it, a powerful disincentive for the fledgling GM, which was loath to jeopardize relations with these mighty power brokers. Surely the du Pont family’s growing interest in oil and oil fields, as it branched out from its gunpowder roots into the oil-dependent chemical business, weighed on many GM directors’ minds.

In March 1922, Pierre du Pont wrote to his brother Irénée du Pont, Du Pont company chairman, that TEL is “a colorless liquid of sweetish odor, very poisonous if absorbed through the skin, resulting in lead poisoning almost immediately.” This statement of early factual knowledge of TEL’s supreme deadliness is noteworthy, for it is knowledge that will be denied repeatedly by the principals in coming years as well as in the Ethyl Corporation’s authorized history, released almost sixty years later. Underscoring the deep and implicit coziness between GM and Du Pont at this time, Pierre informed Irénée about TEL before GM had even filed its patent application for it.

Read the whole thing for much, much more. David Roberts goes a step further, lamenting that we repeat the mistakes we made with lead over and over with other compounds:

We start using something before we understand whether it’s safe. We begin to discover it’s not safe. Industry obscures the science and viciously battles off regulation for as long as possible, forecasting economic doom. Lots of people get sick and die while they do so. Finally some regulations are put in place. The costs of complying turn out to be lower than anyone predicted. The benefits turn out to be much greater than anyone predicted. The pollutant turns out to be more harmful than originally thought. Despite all of the above, industry continues battling efforts to further reduce the pollutant, while claiming credit for the benefits of reducing it as much as they were forced to.

Over and over and over, this story plays out. Yet with each new pollution fight, it’s as though we’ve never had all the previous ones. (See: chlorofluorocarbons, mercury, smog, phthalates, etc.)

This is especially true of compounds like lead, that primarily affect children. If you test lead at moderate levels on adults, you can massage the data pretty easily to show only mild effects. If you test on children over the course of a single year, you can also massage the data to show only mild effects. The problem is that it takes years for the effects of lead on brain development to show up. The kind of research it takes to demonstrate these effects is expensive, and industry obviously has no incentive to fund it. So it doesn’t get done.

In the end, of course, the research was eventually done. And it turned out that as more research was done, lead’s horrors multiplied. The most recent research, which links lead with aggression and violent crime, is merely the latest in a long string of ill effects that can be laid at lead’s doorstep.