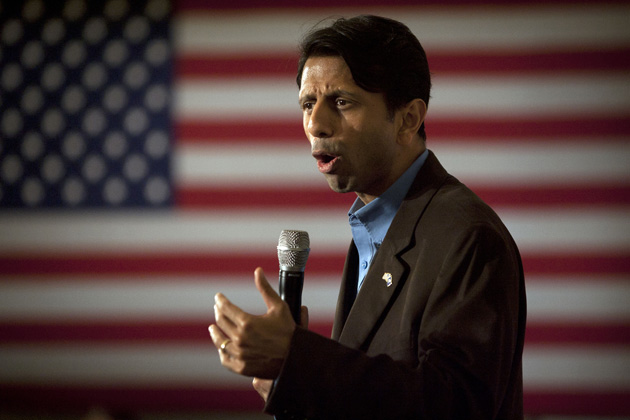 I’m more bullish on Bobby Jindal’s prospects for 2016 than a lot of people I know. Sure, he’s got that exorcism thing in his past, but in four years that will be deemed “old news” and no longer something worth dwelling on. And sure, he gave a bad response to Obama’s first State of the Union address in 2009, but everyone gives bad responses to State of the Union addresses. That’s no big deal.

What Jindal has going for him is a peculiar combination. On the one hand, he’s about as conservative as it’s possible to get. On social issues he’s roughly a clone of Rick Santorum, and on domestic issues he’s…well, he’s the guy who has the brass to suggest that Louisiana should abolish its income tax and replace it with a sales tax. In other words, he explicitly wants to lower taxes on the rich and raise taxes on the poor. Even Newt Gingrich would quail a bit at that prospect.

Flashback: Bobby Jindal once gave a girl an exorcism in college.

So that’s the one hand. The other hand is that, for some reason, the media is willing—so far—to buy into his story of being a reformer who wants Republicans to stop being the “stupid party.” And it’s true: He’s actually said that. But Jindal doesn’t think the GOP needs reforming because it’s drifted too far right, or because it’s alienated young people and Hispanics, or because it’s become too absolutist and unwilling to compromise. Quite the contrary. Jindal thinks the Republican Party isn’t right-wing enough. Here he is from today’s big speech preparing the soil for a 2016 run:

If any rational human being were to create our government anew, today, from a blank piece of paper—we would have about one-fourth of the buildings we have in Washington and about half of the government workers. We would replace most of its bureaucracy with a handful of good websites.

If we created American government today, we would not dream of taking money out of people’s pockets, sending it all the way to Washington, handing it over to politicians and bureaucrats to staple thousands of pages of artificial and political instructions to it, then wear that money out by grinding it through the engine of bureaucratic friction…and then sending what’s left of it back to the states, where it all started, in order to grow the American economy.

…If it’s worth doing, block grant it to the states. If it’s something you don’t trust the states to do, then maybe Washington shouldn’t do it at all.

Later, there are pleasant rhetorical nods to looking forward, not backward; rejecting identity politics; not being the party of big business; and so forth. But that’s just window dressing. Jindal’s vision is plain: He endorses the most stringent social conservatism possible, alongside a breathtakingly absolutist rejection of the New Deal and everything that’s come since. As Ed Kilgore says, “His ‘populist vision’ of conservative politics is about as new and fresh as that of John C. Calhoun, and the rhetoric has been worked to death by ‘anti-Washington’ politicians of both parties for decades on end.”

Will the media continue to tout Jindal as a “breath of fresh air” for the Republican Party? Or will they eventually catch on that he basically wants to turn the entire country into Louisiana? We’ll have to wait and see. But I think Jindal has more crossover appeal than a lot of pundits think. He’s got obvious appeal to the tea party base, which loves his hard-nosed conservatism and really loves the idea of proving that they’re not racists by voting for a hard-nosed conservative who’s also a dark-skinned son of Indian parents. (Take that, liberals!) And the press will, as usual, be wowed by the idea of a hard-nosed conservative who has a high IQ and can discuss policy issues intelligently. The fact that Jindal is singing the same old tired song, and merely wrapping it in a thin fog of policy wonkishness, will take a while to sink in.