The LA Times reports that serious crime was down in Los Angeles this year, but it didn’t decline as much as it has in the past:

Overall, crime declined by about 2% in Los Angeles, fueled by drops in many serious crimes including robbery, assault and auto thefts, according to preliminary numbers collected by the Los Angeles Police Department. The decline was smaller than in previous years because of jumps in lower-level crimes such as thefts from vehicles and personal thefts.

….”The fact that Los Angeles has continued to decline, especially when several factors haven’t been as good as they could be — it’s remarkable, frankly,” said Charis Kubrin, a criminologist at UC Irvine. “I’m puzzled.”….The Police Department’s ability to battle crime, she said, deserved much of the credit, but could not on its own account for the trend. Sociologists and criminologists say other likely factors include strict sentencing laws that, until recently, increased the number of people in prison; demographic shifts; and sociological influences.

….The decade of falling crime in Los Angeles — which continued during California’s deep recession — has forced many researchers and law enforcement officials to rethink the once commonly 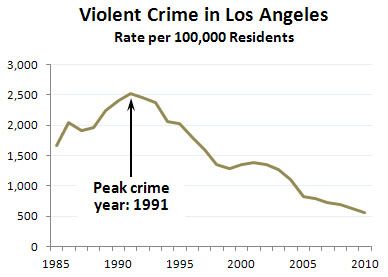 held belief that crime was linked inextricably to the economy.

Lots of people think it makes sense that crime should go up when the economy goes down, but that’s never really been consistently true. So it’s no big surprise that crime has stayed low during our current economic downturn. As for the police department’s ability to battle crime, that does deserve some of the credit. But violent crime in Los Angeles peaked more than 20 years ago, long before LA changed its policing tactics.

A big part of the answer to this mystery is almost certainly lead. Los Angeles is the car capital of the world, and lead emissions from cars rose dramatically after World War II, poisoning small children in ways that lowered both IQ and impulse control. When those kids grew up, more of them turned to violent crime. Then, in the mid-70s, unleaded gasoline took over and we slowly stopped poisoning our children. When those kids grew up in the early 90s and beyond, fewer of them turned to violent crime. This happened not just in LA, but all over the world.

But lead was almost completely removed from gasoline by 1990, and the kids from that era were fully grown by about 2010. We did nothing further in the 90s and aughts to clean up the remaining lead in our environment (mainly from old paint and lead-impregnated soil), and this means that the dramatic crime drops we’ve seen over the past couple of decades are now leveling out.

The good news is that this is permanent. We’re no longer artificially turning our kids into monsters, so the current generation of teens and 20-somethings simply aren’t as violent as they were 30 years ago. The bad news is that this was largely an accident—we initially reduced lead emissions as an unintentional byproduct of combating smog via catalytic converters—and we’ve never seriously tackled lead cleanup beyond that. Improved policing practices will likely keep crime rates at their current low levels, but we could do more if we wanted to. A serious effort to clean up more lead today would produced better, smarter, less violent kids 20 years from now.

If you want to read more about this, check out the latest issue of Mother Jones, which has a long article of mine on the cover about exactly this topic. It’ll be online in the near future, and I’ll have more to say about it then.