After the failure of his fiscal cliff negotiations with the White House, followed by his humiliating inability to get even his ridiculous “Plan B” proposal approved by House Republicans, John Boehner gave up and punted the whole thing over to the president and the Senate. Why? Matt Yglesias says Boehner likes the idea because the only way to get anything through the Senate is to compromise with Republicans, which will produce a deal to the right of Obama’s current proposal. “Then once something like that difference-splitting bill passes the Senate, Boehner gets to take it up as the new baseline for negotiations and pull the ultimate resolution even further to the right.”

True enough. But I doubt this was Boehner’s intent from the beginning. Remember that during the debt limit talks last year, Boehner initially handed off negotiating duties to Eric Cantor, hoping that if Cantor signed off on a deal it would get the rest of the tea party caucus to throw in their votes as well. But Cantor double-crossed him after a few weeks, pulling out of the talks and pushing them back in Boehner’s lap so that Boehner would have to take the heat for agreeing to any tax 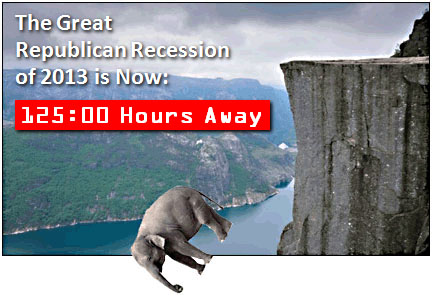 increases. But even at that, Boehner didn’t give up: he tried to keep negotiating until it became clear that the Cantorites just flatly wouldn’t approve any feasible deal. Eventually a deal got done after Mitch McConnell got involved.

We’re seeing the same dynamic this time around: Boehner trying to negotiate, but eventually giving up after it became clear that the Cantorites wouldn’t agree to any feasible kind of deal. So now he’s going back to the debt limit playbook, and hoping that maybe a deal that comes with the imprimatur of Senate Republicans will also get enough Republican votes in the House to pass. Besides, if a deal passes the Senate, that gives him an excuse to bring it to the floor even if it doesn’t have the votes of a majority of the Republican caucus.

Now, it’s true that Mitch McConnell will almost certainly want to take Obama’s most recent proposal and use that as a starting point to move even further rightward:

Yep. However, for PR reasons, Obama has to remain the adult in the room at all times, continuing to negotiate honestly even in the face of seemingly relentless intransigence. No ultimatums, no walking out of talks. But on January 1, taxes on the middle class go up and the economy slowly begins to slide into the great Republican Recession of 2013. That’s the leverage that will finally force GOP leaders to get serious. Obama will never say so publicly, but I imagine he knows this perfectly well.