In the wake of Hurricane Sandy, which he calls “a window into the way ahead,” Nick Kristof chides the media and our political class alike for paying too little attention to climate change:

Politicians have dropped the ball, but so have those of us in the news business. The number of articles about climate change fell by 41 percent from 2009 to 2011, according to DailyClimate.org.

HThere are no easy solutions, but we may need to invest in cleaner energy, impose a carbon tax or other curbs on greenhouse gases, and, above all, rethink how we can reduce the toll of a changing climate. For example, we 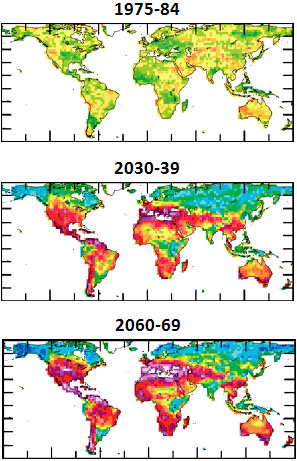 may not want to rebuild in some coastal areas that have been hammered by Sandy.

….Democrats have been AWOL on climate change, but Republicans have been even more recalcitrant. Their failure is odd, because in other areas of national security Republicans pride themselves on their vigilance. Romney doesn’t want to wait until he sees an Iranian nuclear weapon before acting, so why the passivity about climate change?

Let’s do something useful here. Yesterday I wrote a discouraged post suggesting that the world was unlikely to seriously respond to climate change in time to prevent catastrophe, so maybe we should spend more time instead thinking about adaptation and geoengineering, the latter as a last-resort option. I got a lot of pushback on this, which I probably deserved, since it sounded like I was giving up entirely on the idea of fighting greenhouse gas emissions. I wasn’t, but I was talking out loud about the likelihood that even if we keep up the fight, it probably won’t be enough. There are just too many big forces pushing in the opposite direction.

One emailer who pushed back suggested we just needed to keep fighting relentlessly. It worked for Republicans on tax cuts, after all, so it could work for us on climate change. I told him I didn’t buy that. Republicans are working with self-interest in the case of taxes. Everyone likes low taxes, so it’s easy to convince them that low taxes are worth fighting for because they’re also good for the economy. But in the case of climate change, we’re working against self-interest. Way against. We have an invisible, far-future bogeyman we want to stop, but to do so requires considerable personal sacrifice right now today. It will cost us money in higher energy prices, force us to do things we don’t want (eat less meat, stop using plastic bags, give up our SUVs, etc.), and make us change our habits. Sure, there’s low-hanging fruit that’s an easier sell, but it’s nowhere near enough. There’s just no getting around the hard stuff. So I don’t think that merely fighting relentlessly will be enough.

But my real gripe, I said, was that the liberal strategy basically amounts to writing scary stories—something I’ve done my share of. And there’s good reason for that: climate change is scary stuff, so merely writing about it accurately is inherently scary. Still, we’ve been writing these scary stories for more than two decades now, and I think that’s long enough to conclude that they don’t work very well. So while I agree with Nick Kristof that the press should write more about climate change, that mostly amounts to writing more scary stories. And I just don’t think that’s going to do the job.

So here’s the something useful: if you agree with me that the scary story strategy has proven insufficient, what should we be doing instead? The answer can be either substantive (concentrate more on green R&D, for example) or rhetorical (use something other than scary stories to convince people they should endure a considerable amount of inconvenience in order to fight climate change). In either case, you should assume that Republicans and the fossil fuel industry will continue to fight us tooth and nail. No ponies allowed.

So that’s the question: what’s next? If scary stories aren’t doing the job, what will?