It’s a slow news day today, as everyone shakes off their tryptophan-induced comas, and this means that we have to invent things to talk about. Today’s invention is about all the Republicans who have bravely suggested they might be willing to raise taxes (“a mob of three or four, at this point,” says Ed Kilgore acidly) if Democrats, in turn, are willing to put entitlements on the chopping block.

There are several things to say about this. First, several of these Republicans have claimed an openness to tax increases in the past, so there’s a lot less here than meets the eye. Second, none of this claimed openness has actually led to any tax increases in the past. And third, um, just what entitlement cuts are they talking about? Paul Waldman:

The problem with this is that while the Democrats’ position is quite clear—the Bush tax cuts should expire for income over $250,000—the Republicans’ position is extremely vague, on both the tax side and the entitlement side. Let’s take taxes first. [Rate increases? Deduction caps? Or what?]

….Then we get to the price Republicans are going to want to exact for any agreement to stop the Austerity Trap, and this is where they’re vague. They want “reform” of entitlements. And what is “reform,” you ask? Well, nobody ever says. And the reason is that 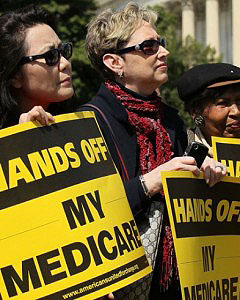 Republicans know perfectly well that the things they would like to do to Social Security and Medicare are unpopular. We can dispense with Social Security quickly: the program is basically fine, and you could eliminate future shortfalls in benefits with some minor tweaking of the financing, like raising the income cut-off for Social Security taxes, which is currently at $110,100. But the real budgetary challenge is Medicare.

Quite right. On Social Security, I continue to hold the unpopular view that liberals would be well served if they could make a deal. Raise the income cutoff to get more revenue, change the inflation formula to cut benefits a bit, toss in a few other smallish items that would be phased in over 20 years, and you’re done. Social Security would be off the table for decades.

The problem, of course, is that this has nothing to do with the deficit over the next few decades, which means there’s really no reason to make it a precondition for a deficit deal. So even though I’m in favor of a deal, I can’t really think of any good reason to do it now.

But Medicare is different. It’s funded partly out of the general fund and its growth projections are plenty scary. It has a lot to do with future deficits, so it makes sense to make it part of a medium-term deficit deal.

The problem is that, unlike Social Security, it’s also insanely complicated. There isn’t some easy basket of fixes that would restrain its growth, and the prospect of getting some kind of serious deal on Medicare over the next three weeks is laughable.

So what exactly are Republicans after? Do they just want the fig leaf of a supercommittee to study entitlements? Are they still obsessed with raising the retirement age and just want to get agreement on that? They can’t seriously think that Paul Ryan’s vouchercare is anywhere near being on the table, can they?

It’s all very mysterious. Just what kind of entitlement reform do Republicans think they can get by December 21? It would be nice to hear at least a hint from them about what they’re after.