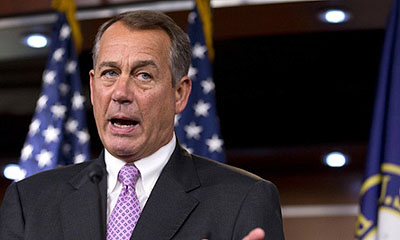 House Speaker John Boehner lost no time getting in the first shot Wednesday on taxes and the fiscal cliff, telling reporters that in order to forge a bipartisan agreement Republicans are “willing to accept new revenue, under the right conditions”:

While Boehner suggested that Republicans would still oppose Obama’s plan to take “a larger share of what the American people earn through higher tax rates,” he said the party is open to “increased revenue . . . as the byproduct of a growing economy, energized by a simpler, cleaner, fairer tax code, with fewer loopholes, and lower rates for all.”

It was not immediately clear whether Boehner meant that Republicans would acquiesce only to fresh revenues generated through economic growth rather than actual tax increases.

Really? That wasn’t immediately clear? I’d say Boehner was being crystal clear: he won’t accept higher tax rates on the rich, and he won’t even close loopholes unless they’re accompanied by lower tax rates on the rich. In other words, his offer is: nothing. After all, it’s not as if there’s anyone who opposes the prospect of getting more revenue as a byproduct of a growing economy.

I think the right way to interpret this is as pro-forma, job-saving bluster. Boehner knows full well that his caucus will eat him alive, with Eric Cantor leading the charge, if he wavers on taxes, so he’s adopting the same hardline position as he did last year but trying to pretend that it’s some kind of kinder, gentler proposal. It’s not. This is precisely the position that Republicans offered during the debt ceiling showdown and precisely the position they’ve stuck to ever since. There’s not even a hint of a difference.

But it’s still bluster and Boehner knows it. On January 1st, the Bush tax cuts expire. They’re gone. At that point, Boehner & Co. can agree to a deal that lowers taxes for everyone on all income under $250,000, or they can hold out for a deal that lowers taxes for everyone and lowers taxes on income over $250,000 back to Bush-era levels. However, if they refuse to make a deal, then no one gets a tax cut, and they’ll be crucified by public opinion for protecting the rich. As Dave Weigel says, voters have made that clear:

Barack Obama ran on one consistent tax promise, in both 2008 and 2012. Vote for him, and you’d see middle-class tax rates stay the same while the rate on income over $250,000 increased to 39.6 percent. In 2008 and 2012, Republicans whaled on Obama for that message. If you flipped on TV in a swing state, you heard all about Obama’s “trillion-dollar tax increase.” Last month, in a comment that Republicans derided for its gaffitude, Joe Biden repeated the claim about tax hikes and leaned into the mic, drawing out his promise: “Yes. We. Will.” For months, Republican strategists told me that they’d beat Democrats on the tax issue just like they beat ’em in 2010.

And that’s not all: poll after poll shows big majorities in favor of higher rates on the rich. Opposing a broad, bipartisan tax cut because it’s not friendly enough to the rich is a losing hand and Boehner knows it. He just can’t admit it yet, so instead he hauled out the same tired talking points from a year ago and did his best to dress them up a little differently. Nice try.