Colorado and Washington both passed ballot measures legalizing marijuana in last week’s election, and in both cases the new laws include product-labeling requirements, a ban on sale to minors, and substantial taxes. Mark Kleiman, co-author of Marijuana Legalization: What Everyone Needs to Know, says he’d like to know how this kind of a regulatory regime works out, and all the studies in the world won’t tell us. You just have to try it and find out what happens. So he hopes that President Obama will quietly allow the two states to give it a try:

The federal government could shut down both of those experiments, if it were determined to do so….But it would make it impossible to learn anything useful from the Colorado and Washington experiments.

So why shouldn’t the federal government cut Colorado and Washington some slack? As long as those states prevent marijuana grown under their laws from crossing state lines and thereby subverting marijuana prohibition in 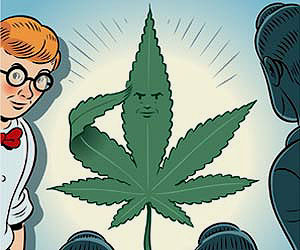 the rest of the states, the Justice Department could step back and let the consequences of the new policies play themselves out. They might succeed, or they might fail. In either case, the rest of us could learn from their experience.

I doubt that either state can effectively prevent locally-grown marijuana from crossing state lines, but hell, they can’t prevent it now either. So I’m with Mark: there’s no need to announce any public change of policy, but Obama should tell DEA to lie low for a while and see how Colorado and Washington do. A controlled experiment like this is the best way of finding out the effect of full legalization of marijuana. Does it lead to higher consumption? Is it a gateway drug? Will it reduce consumption of alcohol?

Three years ago, in a story given the most peculiar headline ever by my editors, I predicted that the answers would be (a) yes, moderately; (b) no; and (c) quite possibly. And since substitution of alcohol consumption with marijuana use would probably be a net positive, it’s well worth a try.

I also predicted this would take a while: “Ten years from now,” I concluded, “as the flower power generation enters its 70s, you might finally be able to smoke a fully legal, taxed, and regulated joint.” If the feds agree to back off, I will have been seven years off. At least for some of us.