Last night 60 Minutes did a segment about manufacturing companies that can’t find good entry-level workers even though millions of people are out of jobs. While reporter Byron Pitts was reading the intro, I threw my shoe at the TV (figuratively) and told Marian acidly that it would almost be worth watching the segment just to see what idiocy they were going to promote this time around. I was just about to switch back to the Bears-Texans game, but it turned out Marian wanted to watch the segment, so I ended up watching it 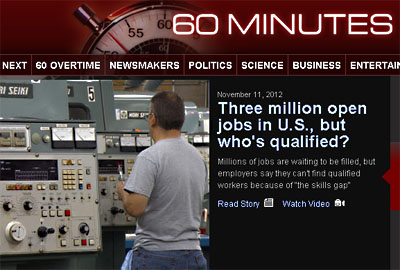 too. About halfway through, after describing a local community college in Reno that trains students to run complex, computer-controlled machines, we got this:

Most of the students here will start at jobs paying 12 dollars an hour.

At that point I jeered. You’re wondering why you can’t get highly qualified applicants for 12 bucks an hour? Spare me. But then, to my surprise, a few minutes later Pitts dealt with this head on:

Byron Pitts: Do you think if manufacturing paid more, could that be part of the issue? Part of the equation?

Peter Cappelli: This is a market. And so, you know, if you’re not willing to pay more, don’t expect to get better quality people….One of the things we know now is wages are not going up. In fact, they’ve been stagnant and some cases even declining over time. So where is the shortage?

Byron Pitts: What’s changed in the way that American companies hire workers compared to a few decades ago?

Peter Cappelli: I think there are big changes. And I think this is the heart of what is new. What’s new now is that employers are not expecting to hire and train people….Companies are now saying, for all kinds of reasons, “We’re not going to do it anymore.” And maybe they’re right, they can’t do it. But what they probably can’t do is say, “We’re not going to do it, and it’s your problem. It’s your problem to provide us with what we need, Mr. and Mrs. Taxpayer. You need to pay for this for us.”

Shortly after that, Pitts talks to a guy at a local company that’s having trouble finding workers, and he confirms this: “I can’t afford to develop every worker that I need from scratch. One, that’s not my core competency. We’re not a school, we’re a company. We can’t do that well. Two, we can’t afford to do that. If we actually had to do that from scratch, even if we could, the jobs would have to go somewhere else, because it’s simply not economically tenable to do that.”

Companies like this all insist that American manufacturing is too competitive with anyone in the world. But look. If you can’t afford to train workers, but you also can’t afford to pay the wages it takes to attract experienced workers, then by definition that means you aren’t competitive. The only time you’re competitive is when a recession has made people desperate and the government helps you out with training. And who knows? Maybe this kind of training is a good use of taxpayer money. Wall Street certainly benefits from the training provided by state universities. But it’s still a subsidy no matter how you slice it. Without it, apparently, American manufacturing just isn’t very competitive.