WRAP-UP: Biden came out of the gate swinging, accusing Ryan of peddling “malarkey” in his very first statement. This set the tone for the entire debate: Biden was pretty hot throughout, openly laughing at Ryan’s responses, getting testy even with Martha Raddatz at one point, and letting his anger show on three or four occasions. Generally speaking, I think he kept this under control, but not always. Ryan’s calmer demeanor served him pretty well throughout. Transcript here.

Substantively, the discussion of taxes seemed like a draw. This is frustrating. The fact that Romney’s plan doesn’t add up is an obvious point of attack, and yet neither Biden nor Obama seems to have a well-rehearsed 60-second schtick to explain it. Maybe it’s impossible. Maybe there’s just no way to score a clean win in an argument that revolves around numbers and tax jargon. Biden pointed out the problems with the Romney tax plan, but Ryan then just flatly lied and insisted that Romney’s plan really did add up. There’s 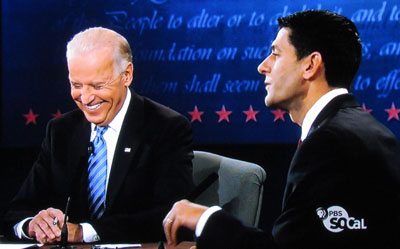 no plausible way that’s true, and Biden tried to trap him on specific deductions, but Ryan just smiled his way through it. When Raddatz asked him he could guarantee that everything added up, Ryan said absolutely yes. How do you fight that in 60 seconds?

I thought the strongest part of the debate for Biden came on Afghanistan and Syria. On Afghanistan, he was surprisingly firm about the 2014 withdrawal deadline: “We are leaving. We are leaving in 2014. Period.” And when Ryan responded with a primer on the fighting season, Biden had a good response: “That’s right, we’re sending in more Afghans to do the job.” Not only is this an answer I like, but I think it’s an answer the American public likes too. It also left Ryan flatfooted since he wanted to disagree, but couldn’t really point to anything specific Romney would do differently. He sounded a bit petulant, disagreeing just for the sake of disagreement.

On Syria, Biden again did a good job of flatfooting Ryan on exactly what they’d do differently if they were in charge. Ryan had nothing to say, so he just retreated to talking points about how slowly everything had gone and how Romney would have done better by projecting strength and resolve. Or something. He didn’t come out on top here.

I liked Raddatz’s question about whether abortion supporters had reason to be worried if Romney were elected. The obvious answer is yes, but Ryan had to tap dance around it a bit. This probably didn’t hurt him too much, especially since Raddatz cut off the segment pretty quickly, but it was a little weaselly.

On the economy generally, I’d score the debate a draw. Biden did a good job of defending the past four years, but not a good job of setting out a vision for the next four. This isn’t his fault, though: Obama hasn’t done much on this score, so there’s no vision to tout. In the end, though, this didn’t hurt him since Ryan couldn’t do much better. He had a hard time defending his tax cuts for the rich and a hard time defending his Medicare plan. When Biden asked “Who do you trust on this?” my guess is that most people picked him over Ryan just because Biden was so obviously passionate about protecting the middle class. But I wouldn’t swear to that.

Overall, I guess I’d score this about the opposite of Wednesday’s debate: Biden gets a B, Ryan gets a B-.

Here we go. It’s time to liveblog the 2012 vice presidential debate in Danville, Kentucky. Let’s do this.

10:30 – In closing statement, Biden admits his “frustration” during the debate. That’s probably a good concession. He did indeed sometimes seem a little too angry/frustrated at times. Ryan, by contrast, sometimes seemed a little exasperated.

10: 28 – Whining about how much time you’re getting is never a good idea. Period.

10:27 – Ryan’s strategy seems to be that no matter what the question is, the answer is a stump speech.

10:26 – On the other hand, Ryan’s attack was reasonably effective.

10:20 – Raddatz asks Ryan if voters should be worried about abortion rights if Romney elected. Ryan declines to answer. Biden’s response pretty good. Raddatz moves on, which is probably good news for Ryan.

10:14 – I’d score the Syria segment a win for Biden. He’s correct that Romney has never really said what he’d do differently. When Raddatz asked Ryan about that, he stammered and retreated to talking points about the UN and Russia. And his criteria for intervention? “The national interest.” No kidding. He had no answer.

10:06 – Not sure this whole fighting season thing is getting across to anyone, despite Ryan’s efforts to “explain” everything.

10:02 – Ryan: We agree with the timeline, but we don’t want to broadcast our timeline to our enemies. Spare me.

9:55 – Not sure who came out on top on taxes. Too many numbers for most people to follow. Too easy for Ryan to just make flat claims and not have to back them up.

9:54 – Biden: “Can you guarantee that no one making less than $100,000 will have their mortgage deduction impacted? Guarantee?” Ryan not willing to answer.

9:52 – Biden doing a good job of pointing out deductions that would have to be cut.  Ryan just flatly lying about being able to fund rate cuts with deduction closures. But trotting out the usual excuses for not being willing to say how it would work.

9:50 – Ryan’s tax wonkery not working well. Raddatz: “And you guarantee this math will add up?” Ryan says “absolutely.”

9:49 – Ryan’s basic tax message seems to be that raising taxes on the rich isn’t enough to close the entire deficit, so it’s obviously not worth doing. Um….

9:48 – Wow. Ryan somehow trying to claim that if Obama won’t cut taxes on the rich, that must mean he wants to increase taxes on the middle class. Smooth move if he gets away with it.

9:39 – Biden: “Folks, follow your instincts on this one.” Romney/Ryan will slash Medicare.

9:37 – Biden speaking directly to the camera: seniors have more benefits today than when we took office.

9:33 – Generally speaking, Ryan is coming across as pretty credible so far. Biden is attacking him hard, but I’m not sure if he’s being specific enough to do a lot of damage. However, the bit about Ryan writing letters asking for stimulus funds was pretty good.

9:32 – Biden might need to cool it on the split screen laughter at Ryan.

9:30 – Biden: “If they’d get out of the way” we’ll create more jobs. Good attack on Republican obstructionism.

9:20 – Bibi’s my friend! I hope everyone knows who he’s talking about.

9:18: – I’m not sure that downplaying the Iranian bomb program is working for Biden.

9:15 – Biden: If Republicans had been in charge of sanctions, the rest of the world never would have gone along. I wish Biden had expanded on that.

9:11 – Raddatz is certainly taking a very different approach than Jim Lehrer did.

9:09 – Biden: “That’s a bunch of malarkey.” Pretty strong comeback from the veep.

9:06 – On Libya, Biden somber right off the bat. Ryan goes immediately into attack dog mode. A sign of things to come?

9:00 – Programming note: Apparently Martha Raddatz is required to call Paul Ryan “Mr. Ryan” rather than “Congressman Ryan.” This was part of the pre-debate negotiations. I gather that Ryan doesn’t want to remind anyone that he’s a member of one of the most feckless and detested institutions in America.