Mitt Romney’s complaint that lots of people pay no federal income tax has become a familiar conservative lament over the past few years. But how did this become such a staple of tea party conservatism? Here’s a case study that gives us a clue.

The main target of Republican ire on the zero-tax front isn’t the elderly or the temporarily unemployed. It’s poor people. And one of the reasons that so many poor people pay no income tax is the Earned Income Tax Credit, which can reduce your tax bill to zero or less. To qualify, though, you need a minimum income (i.e., you need to have a job), which makes the EITC an incentive to work—and this is why it’s an anti-poverty program that Republicans 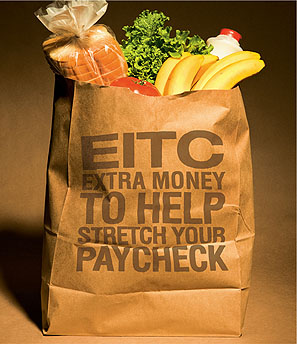 used to support. Reihan Salam tries to figure out why they don’t anymore:

A more parsimonious explanation is that cohort replacement and a lack of a sense of history is doing all of the work: many of today’s Republicans are unacquainted with the case for the EITC and the child tax credit and the exclusion of Social Security benefits, or they fail to connect these initiatives to the narrowing of the tax base. This isn’t a sinister plot.

Maybe. But let’s do a quick history review first. Back in the ’60s there was a groundswell of support for a negative income tax, a concept that held some appeal as a simple mechanism that could replace the complex alphabet soup of existing New Deal and Great Society anti-poverty programs. But Mr. Great Society himself, Lyndon Johnson, objected to it because it doled out money even if you weren’t working. (FDR probably would have opposed it for the same reason.) Republicans agreed that it undermined incentives to work, and the NIT died.

However, after several years of political haggling, Sen. Russell Long (D-La.) won passage of the EITC in 1975. Because it was available only to those with earned income, it provided a positive incentive to work and enjoyed bipartisan support. It was made permanent in 1978, again with bipartisan support.

But then things changed. EITC was expanded in 1986 with support from Ronald Reagan but with far less support from congressional Republicans, most of whom fought the expansion. Another expansion in 1990 enjoyed even less Republican support, and in 1993, when Bill Clinton included a further expansion of EITC in his budget bill, it passed with no Republican votes at all. It was at this point that the EITC became associated exclusively with Democrats, and after the Gingrich revolution of 1994 the EITC became a frequent target of attacks from the GOP. House Republicans pushed for major cuts, and Clinton eventually managed to buy them off only by setting up a special $100 million IRS fraud unit targeted specifically at the working poor.

Roughly speaking, then, Republican support for the EITC has steadily declined since the mid-’80s, and the majority of the party has been actively opposed to it since the mid-’90s. So I don’t think you can really blame the current antipathy toward EITC on the historical ignorance of modern Republicans. This all started 30 years ago, when Republicans were still keenly aware of both the program’s origins and its conservative policy underpinnings. They just decided they didn’t like the idea of giving money to poor people anymore. Now they’ve gone even further, and Mitt Romney’s echo of his wealthy donors’ disdain for the nontaxpaying poor is merely the next step along a logical path. Here’s the path:

2005-present: Not just opposed to EITC, but actively in favor of making the poor start paying income taxes

The EITC hasn’t been a bipartisan program for a long time, and its current sorry state within the GOP isn’t just due to youngsters who have forgotten their party’s past. As the EITC’s history demonstrates, for the past several decades the core of the Republican Party has simply become steadily more hostile toward the working poor. They’re no longer fellow citizens who deserve some help as long as they’re willing to work, they’re parasites who are mooching off the sweat of the productive classes. You can decide for yourself if this is sinister or not.